The 2019 MLB Postseason bracket has now been finalized. Thanks to the Cardinals clinch of the National League Central, the playoff picture is now established. With the Red Sox missing out on a playoff spot this year, a new champion will be named. The postseason will be starting Tuesday, with the NL Wildcard game taking place between the Brewers and the Nationals. 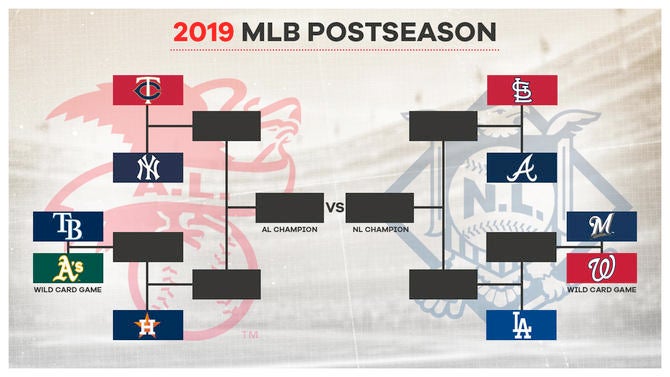 Thank you to the fans who stuck with us.

Thank you to the fans who packed #Nats Park this weekend while we battled for home-field advantage.

(We're not done yet. See you all on Tuesday.)

This is it. The National League Wild Card Game is solidified between the Nats and the Brewers. Kicking off the MLB postseason are these two teams, who will meet to see who will have a chance to take on the Los Angeles Dodgers for NL dominance. Regardless, the Brewers are going to have to face off against Max Scherzer, the Nationals’ power pitcher, as they did back in their first series against Washington. Scherzer struck out 10 in that series. In the second series, the Nationals slammed through the Brewers’ defense. 32 runs were stacked in this series, with 30 of those 32 coming in games two and three. All in all, the Brewers have a tough game ahead thanks to Scherzer. If they can outlast him, they may stand a chance against the Nats’ bullpen. Likewise, Brewers’ pitcher Brandon Woodruff has a decent track record with the Nats, so this may turn into one competitive matchup.

The last time the Rays saw the MLB postseason was 2013. For the A’s, it was last year. In other words, both of these teams have a lot of pride at stake. The A’s aren’t trying to lose to a team that is the spitting mirror image of themselves. The Rays went 96-66 this season while the  A’s went 97-65. However, there is one player from that 2013 Rays team that the A’s need to keep an eye on: Kevin Kiermaier. The guy was just a 22-year-old rookie back then, but now, he’s the face of the team.

Oakland hasn’t released anything official when it comes to pitching, but have options against the Rays. They can use their best starter, Sean Manaea, use another pitcher then rotate to Manaea, or rotate with the whole bullpen.

The St. Louis Cardinals are the National League Central champions for the first time since 2015. They clinched the division title with a 9-0 victory over the Chicago Cubs on Sunday. They will go on to play against the Atlanta Braves for the NLDS. The Cardinals have Jack Flaherty in their pocket for the upcoming series. Flaherty threw for seven shutout innings with just two allowed hits. It’s possible the Cardinals will play him on Thursday’s game, but on such little rest, they may not. The Braves’ track record against the Cardinals isn’t pretty either. However, this is their best season since 2003, with a record of 97-65. Dallas Keuchel will be most likely be the starting pitcher in Game 1 for the Braves. The veteran southpaw earned a 3.75 ERA.

There are just four days for the Yankees to think of a game plan for the dominating Twins. Though the Twins fell to the Royals on the last game of the regular season, they claimed the home run record. The match-up is set to be a heavy-hitting one for sure. They were one of the four teams to finish with a 100 win season at 101-65 (just one win away from the franchise record). Meanwhile, the Yanks are hoping for their first World Series since 2003. When asked what Yankee stadium will be like on Friday’s game, slugger Aaron Judge told the New York Post, ““Oh, it’s going to be rowdy. We’re looking forward to it. We’re excited to get back home and see The Bronx come out in numbers.’’