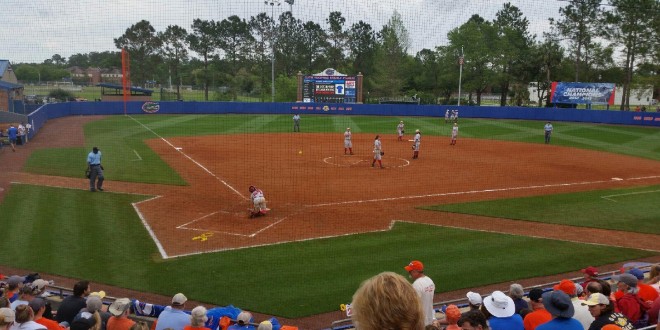 In front of a season-high crowd of 2,241 fans at Katie Seashole Pressly Stadium, the top-ranked Florida Gator softball team defeated sixth ranked Alabama 3-2 on Saturday to even the series with the Crimson Tide after losing the first game on Friday.

Both teams got off to slow starts on Saturday, with no runs scored through the first two innings. The game was suspended for about 15 minutes in the bottom of the second due to heavy rain. In the third inning, the Gators finally came alive with Kirsti Merritt scoring off an RBI double from Amanda Lorenz to give the Gators a 1-0 lead.

Florida freshman pitcher Kelly Barnhill struggled in the top of the fourth. After allowing no hits through the first three innings, Barnhill allowed three hits in the inning. One of those hits was a two run home run from Alabama catcher Reagan Dykes, who gave the Crimson Tide a 2-1 lead.

Unfazed, the Gators bounced back in the bottom of the fourth off a home run from Taylor Schwarz to tie the game 2-2.  Schwarz said she felt she knew the pitching of Alabama pitcher Alexis Osorio better her second time at bat when she hit the home run.  The Gators would take the lead in the bottom of the fifth, with their final run of the game, off a RBI from Kayli Kvistad to score Kelsey Stewart.

Delanie Gourley replaced Barnhill in the top of the sixth. Barnhill finished her day with six strikeouts while giving up three hits and two runs.

Florida’s defense was a high point in the game, with one of the highlights being a 8-4-2 putout from the likes of Merritt, Nicole DeWitt and Aubree Munro to tag out Rachel Bobo at home plate, who was threatening to score another run for the Crimson Tide in the top of the fourth.

When asked about the team’s defense, Schwarz said this team is definitely the best one, defensively, she has been on.

Saturday served as the first day of Alumni Weekend for Florida, as well as a chance to raise awareness for pediatric cancer. Both Florida and Alabama wore yellow in honor of the cause. The mothers of Heather Braswell and Ian Lockwood, who both passed away from cancer, threw out the first pitch on Saturday.

Florida softball head coach Tim Walton says it is important to pass on the memories of Braswell and Lockwood.

Saturday’s victory improves Florida’s record to 34-2. The Gators will be going for the series win against the Crimson Tide on Sunday. First pitch is set for 1 p.m.