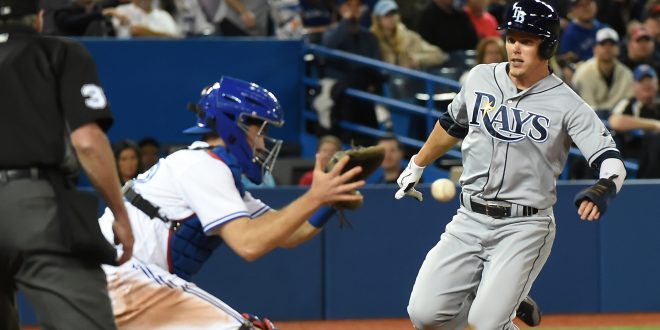 The Tampa Bay Rays (18-19) look to complete the series sweep against the Toronto Blue Jays (19-22) with their third game in as many nights.

The Rays won the previous two games of the series in a dominating fashion, scoring double-digit runs in each. Four players had home runs for the Rays in the first game as Tim Beckham and Curt Casali added three-run homers, Steve Pearce added a two-run homer and Desmond Jennings added one in the ninth. Taylor Motter had his first major league home run during the second game.

Congrats to @taylormotter7 after his first home run for @RaysBaseball! #MLBhttps://t.co/zs2Gwn0KFs

Manager Kevin Cash praised his offense for their recent effort after collecting 34 hits in the last 2 games.

Jake Oderizzi will start on the mound for the Rays tonight. Entering his ninth start of the season, he is also looking for his first win. Oderizzi is 0-2 in starts on the season and 2-2 with a 3.31 ERA all-time during his eight starts against the Blue Jays. R. A. Dickey, 2-4 with a 4.31 ERA on the season, will start for Toronto.

The Blue Jays will be without their manager for the second straight game as he continues to serve his three-game suspension, but first base coach Tim Leiper will be back after serving one game. Both outfielder Jose Bautista and pitcher Jesse Chavez have appealed their suspensions and will be available tonight.

Fourth year Journalism major at the University of Florida, focusing in Sports Journalism. Writer for WRUF and WUFT.
@@KimbleUF
Previous Series Shifts to Tampa Bay for Game 3
Next Action in Oakland: Game 2 of the Western Conference Finals

The MLB kicks off its 2021 season on April 1st, and they’re finalizing the rules …