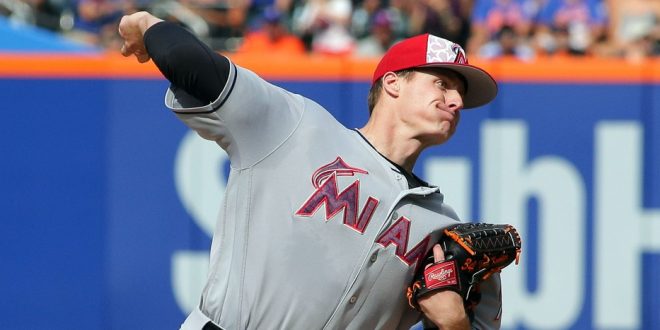 This past week has been peppered with both wins and losses for the Miami Marlins, but they sit third in the National League East standings, behind the New York Mets and the Washington Nationals. In the first game of the series against the Mets, the Marlins blew an early six-run lead, losing 8-6. In the second inning the Fins batted-in the first three runs. With Giancarlo Stanton on first, Chris Johnson singled and Stanton scored. Then Adeiny Hechavarría doubled deep into center, allowing Johnson to score. Next at bat, Tom Koehler singled and Hechavarría reached home.

The fourth inning gave the Marlins three more runs, but was also the start of the Mets’ comeback. With Martin Prado fifth at bat, the bases were loaded with J.T. Realmuto on first, Hechavarría on second, and Johnson on third. Prado “grounded into fielder’s choice to pitcher”, and a throwing error by the Mets’ Matt Harvey allowed Johnson to score, moving Hechavarría and Realmuto up a base. Next, when Christian Yelchin singled to center, Hechavarría and Realmuto scored. While in the eight, Realmuto stole third and Ichiro Suzuki got his 2,990th hit in the eighth, the Marlins never made it home for the rest of the game.

When you are 10 hits away from 3000 like #Ichiro, you get a billboard by @FOXSportsFL. Tune in tonight @Marlins fans pic.twitter.com/xtevYpMBMg

New York’s comeback started with Travis d’Arnaud’s 399-foot homer to right center and was followed in the next inning with a homer by Curtis Granderson. The Mets went on to bat-in two scores in the sixth inning, two in the seventh, and two in the eighth.

After the tough loss in the first game in the three-game series, the Marlins will look to bounce back in game two of the New York road trip. The Miami club most likely wants to exchange its up-and-down pattern for a winning streak. They need Stanton to step up to the plate literally and figuratively. Stanton, with a 6-foot-6 245-pound frame and natural power and speed that has made him a top player in the league, has recently faced struggles at the plate. Starting on May 1, Stanton had a 27-game slump, batting .149 which was the worst in the league during that time. Luckily, he began learning from Barry Bonds, legendary slugger, MLB all-time home-run leader, and new hitting coach for the Marlins. Since studying under Bond’s prized tutelage, Stanton has begun to work his way out of the slump. Starting on June 8, he has hit an average of .261, with three home runs and 14 RBIs.