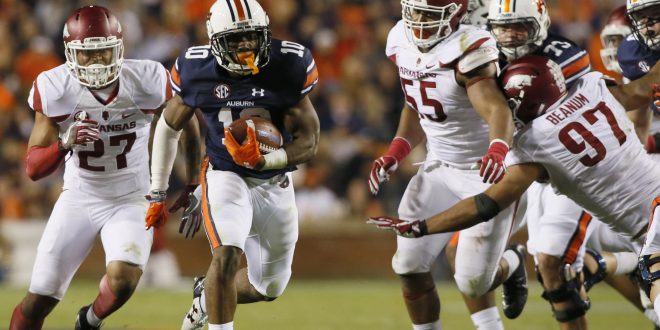 The Razorbacks (5-3) sit in fifth place in the SEC West with a 1-3 conference record, and it doesn’t get any easier for head coach Bret Bielema and company.

The second-ranked rushing defense in the SEC last season belonged to Arkansas. But after allowing 543 yards on the ground this past weekend to Auburn, they are 12th in the conference in rushing defense this year, allowing more than 220 rushing yards per game.

Arkansas hosts #11 Florida on Saturday, their fourth straight game against a ranked conference opponent. Last week Auburn decimated the Hogs 56-3. The week prior, Arkansas topped then-12th ranked Ole Miss 34-30. And the week before, top-ranked Alabama left Fayetteville with a 49-30 win.

Arkansas has allowed an uncharacteristic 31.4 points per game, barely cracking into the top 100 defenses in the nation (#92), and while they are passing for 256 YPG and averaging 30 PPG, their offense hasn’t been able to make up for defensive blunders like Saturday in Auburn.

Auburn held the Razorbacks to 215 total yards, 25 of them on the ground.

Head coach Bret Bielema knows that they need to turn things around against a talented and hot Gators team.

Florida is coming off a 24-10 win against Georgia where they held the Bulldogs to 164 yards. It was the fifth time this season they held their opponent to under 200 yards of offense.

SEC Nation will be in Fayetteville to cover the SEC East/West clash this weekend.

#SECNation is coming back for the third straight year and has a new location on campus!

Arkansas’ junior quarterback Austin Allen has faced tall task after tall task taking on SEC West defenses almost every week, but he will have to go above and beyond this weekend in order for his team to crack through Florida’s eleven on defense. Only Tennessee’s Josh Dobbs has thrown for more than 200 yards against the Gators.

Allen has a 62 percent completion percentage, good for 2,048 passing yards and 18 touchdowns with seven interceptions.

He has thrown three touchdowns in four contests, including against Alabama and Ole Miss, but is coming off his worst performance of the season: 187 yards (season low), 0 TDs, 1 INT.

Bielema disregarded any concern about the health of his quarterback, as he suffered an injury in the Auburn game, as backup QB Ty Storey played the final 12 minutes.

Bielema said the injury was just a bruise.

The other playmaker that Arkansas will need to lean on is RB Rawleigh Williams III, whose 180 yards on 27 carries and a touchdown reception helped boost the Razorbacks past Ole Miss two weeks ago.

The sophomore Williams III has rushed for 807 yards and 5 TDs, good for fourth in the SEC, and is averaging 5.3 yards per carry.