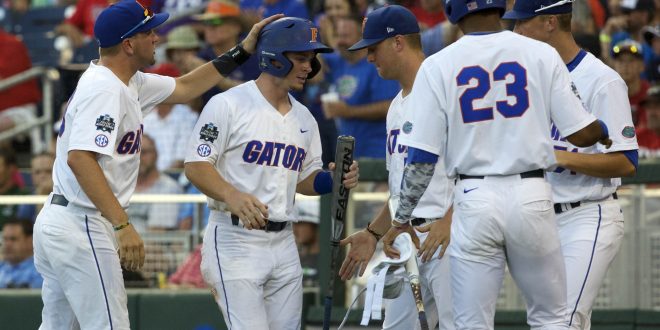 Gator Baseball No. 3 In Preseason Rankings

They haven’t yet taken the stage at McKethan stadium yet, but the Florida Gator Baseball team is predicted to dominate on the clay this season.

Baseballamerica.com ranked the Gator squad at No. 3 in the 2017 College Baseball Preview, only behind No. 1 Texas Christian University and Florida State. It’ll take months of grinding on the diamond to see if the predictions reign true, but as the season opener looms near on February 17, Florida has a lot to look forward to.

Building Off Of Success

Florida finished off the 2016 season 52-16 with a trip to Omaha but wasn’t their first appearance at the big dance. Kevin O’Sullivan has taken the Gators to the College World Series five times in his nine years as head coach. Right now, he’s on an active streak of making it the past two season but never in program history have the Gators come home with it all. Last season, they went 0-2 in the tournament with one run losses to eventual champions Coastal Carolina and Texas Tech.

Even still, it was a record-breaking year, as the Gators turned in the best regular season (44-11) in program history and equaled the second-most wins in school history with a 52-16 final record. Against in-state rival Florida State, the Gators finished 2016 with a 5-1 record against the Seminoles, who they eliminated in the Gainesville Super Regional.

The 2016 team finished with a highly decorated roster: five All-Americans, three First Team honors, two freshman All-American selections and the SEC Pitcher of the Year. This stellar lineup took many of the stars to the draft, twelve in all. Now, the team and O’Sullivan will have to find out how to fill the gaps and who will step up to the plate.

The biggest hole left in the Gators’ lineup is slugger and first baseman Peter Alonso; he led the team in batting, OBP, slugging, homers and RBIs. Alonso was selected in the second round of the draft, along with their other most dependable source at the plate, center fielder Buddy Reed.

From the hill, the Gators will miss the presence of SEC Pitcher of the Year Logan Shore and first-round picks left-hander A.J. Puk and righthander Dane Dunning. Shaun Anderson (second round) and lefty Scott Moss (fourth round) lead the team with the lowest ERA, 0.97 and 1.57, respectively. Kirby Snead, who may not have gone as high in the draft, was a dependable arm for the Gators last season. He appeared in more games (41) than any other arm.

Big shoes to fill, but many young players contributed to Florida’s success last season.  The returning freshman class that dominated much of the infield for the Gators will need to continue their productivity at the plate. Infielder Deacon Liput had 14 doubles and four triples as a SEC All-Freshman selection. Jonathan India claimed a freshman All-America season after hitting .303 with 40 RBI and outfielder Nelson Maldonado will look to build on his .405 slugging percentage.

The more experienced leadership at the plate will come from much of the junior class like Dalton Guthrie, Mike Rivera, and JJ Schwarz. Guthrie led the SEC with 279 at bats last season and led the Gators with 85 hits. Rivera will only need five more RBIs to mark 100 in his career and can continue his dominance behind the plate as a catcher; he earned 2016 All-SEC Second Team and SEC All-Defensive Team.

Rivera splits time with Schwarz, who was the only Gator to appear in and start all 68 games last season. Schwarz can be relied on to make something happen at the plate; after his stellar freshman debut in 2015 as the SEC Tournament Most Valuable Player and All-SEC second team, he was a force last season as well. He hit .290 (73-252) with 60 RBI and 47 runs scored and also walked 45 times (3rd in the SEC.

Righthander Alex Faedo will most likely be the go-to guy for Friday night’s as the starter, leading the team in wins with 13 and strikeouts with 133 last season. Sophomore Brady Singer is likely to follow up behind him, already an early favorite to be the first overall pick in the 2018 draft.

Only Time Will Tell

Do the Gators have the combination to bring home the trophy this year? Some may say so with the group of hungry young players, polished veterans to lead the pack, and an elite set of arms in the bullpen. But it’s a long season ahead and if there’s any sport that “if it can happen it will happen” applies best, it’s baseball.

Previous Belichick and Brady Heading to Their Seventh Super Bowl Together
Next Florida Women’s Tennis Projected to Win SEC, No.1 in NCAA