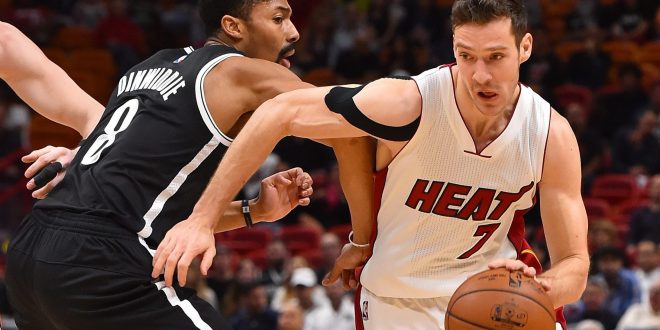 Red-Hot Heat Make it Eight in a Row

For most Heat fans, it looked like their season was over before even reaching the All-Star break. While holding one of the worst records in the Eastern Conference, some speculated this was a tank year for Miami. However, after last night, Miami defended their home turf against the Brooklyn Nets. With the win, the Heat add to their tally and have rattled off eight wins in a row. Their record improves to 19 – 30. While not impressive, this puts them within four and a half games behind for playoff contention in a volatile Eastern Conference.

For Miami center Hassan Whiteside, this was the goal all along. Whiteside said they’re not focused on the streak but the game ahead. Despite this, the Heat’s win streak is the current longest in the NBA. Additionally, the team has toppled some of best in the league right now, defeating the Golden State Warriors, Houston Rockets and the Milwaukee Bucks.

In the 2nd quarter, Miami fell behind 50 – 39. But with some tough defense transitioning to easy offense on the other end, the Heat were able to string together a 15 – 0 run. Guard Dion Waiters said the stops they made were crucial. Whiteside had three blocks this game, two of which came during the second quarter run. In 30 minutes, the Miami center would contribute 9 rebounds and 12 points.

In their streak of games the team’s back court has been playing particularly well. Guards Goran Dragic and Waiters have been the team’s go to players in crunch time. In fact, in the Heat’s victory against the Warriors, Waiters popped a deep game winning three. In that game Waiters posted a career-high 33 points.

Waiters’ performances granted him the Eastern Conference Player of the Week Award from the league on Monday. Over the past week the guard averaged 23.3 points, 5 assists and 4.5 rebounds per game. What’s notable is Dragic’s play had him also nominated for Player of the Week.

Last night’s game was no different as the guard tandem was at it again. Waiters had 19 points, 9 assists and 6 rebounds. Dragic had 20 points and 8 assists. The point guard got it done on the defensive end as well, adding 3 board and 3 steals to his tally.

The team needs to rally around Waiters and Dragic’s hot play to continue their streak.  Rookie guard Rodney McGruder helped his team with 13 points. Forward James Johnson contributed 33 minutes, 17 points, 5 assists, and 4 rebounds. Johnson also got the job done on the defensive end, as he matched Whiteside’s 3 blocks and added 2 steals.

If these kinds of performances continue, the Heat should have no problem continuing to win games. Waiters is having a career year, and if he keeps improving he and Dragic will become another guard combo the league should be fearful of. Miami should keep an eye out for their two best players right now.

The Heat play Wednesday against the Atlanta Hawks at the American Airline Arena. The Hawks are coming off of a 4OT victory against the New York Knicks. Miami tries to keep their win streak, and playoff hopes alive.