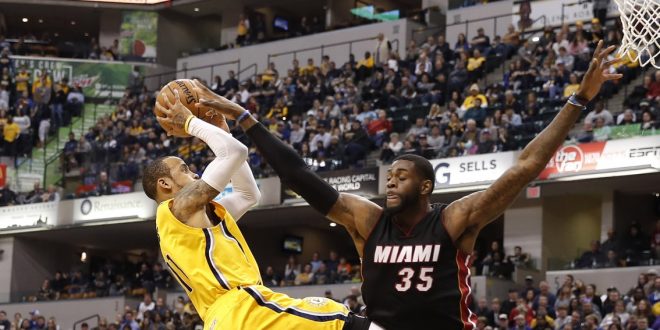 Miami Heat Fall to Pacers and Fall in East Standings

On Sunday Miami Heat fought hard against the Indiana Pacers, but fell short after going cold in the final three minutes of the game, resulting in a final score 102-98. This loss now has the Heat  struggling to move into playoff position as they stand at No. 9 in the East. They are a full game behind the No. 8 Milwaukee Bucks. Fortunately for the Heat, the Chicago Bulls lost too, so they remain a half game ahead of No. 10 Chicago.

Key factors that may have led to the Heat’s loss on Sunday include that absence of one of their key and most consistent players, Goran Dragic, because of an eye injury. The Heat arrived in Indianapolis at 4 am, 14 hours before their 6 pm game; coming from their win against Toronto on Saturday, and adjusting to the daylight savings time change. As easy as it is to make excuses for a tough loss, the Heat knew that over anything else, the unlucky and crazy bounces at the end of the game are what brought them this loss.

The Heat made the game interesting, after rallying from 10 points down with 9:37 left in the game, to taking the lead with three minutes left. Dion Waiters, who scored twenty points in the game, hit a long jumper with 3:24 left to put the Heat up 96-95. Heat missed five threes in the last 2:37 of the game while the Pacers scored seven consecutive points after the Heat’s lead. Miami’s defense was also problematic for Sunday evening’s game, allowing the Pacers to score 60 points in the first half.

Since the “Big Three” have left the Heat, Miami has failed to achieve their former success in the playoffs, as they are almost a completely different team. This year is their first year without Dwayne Wade, and they are really working to rebuild the team to be back to where it used to be. While expectations may be different, they continue to succeed.

While their playoff appearance certain isn’t certain, they will keep their momentum in hopes to win a playoff position. They will take on the New Orleans Pelicans this Wednesday at 7:30.