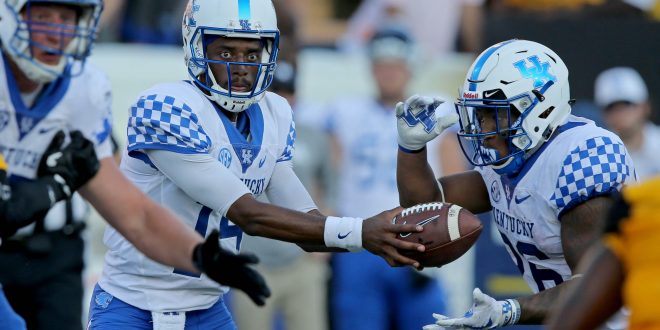 The University of Kentucky Wildcats host the Eastern Kentucky University Colonels for Saturday’s home opener. The Wildcats are 4-0 all-time against EKU. The SEC team is also 9-0 all-time versus teams from the Ohio Valley Conference. The last time the two met up, Kentucky came back from a 14-point deficit to win 34-27 in overtime.

Here’s how week 1 played out for both teams.

The Wildcats started their season 1-0 at Southern Miss with a 24-17 victory over the Golden Eagles.

During the game, Kentucky’s quarterback, Stephen Johnson, threw for 176 yards and had an 8-yard run to score the first touchdown. In the second half, Kentucky’s defense recovered two fumbles which helped put them at a 17-10 lead in the third quarter. The first fumbled forced by Kentucky safety Darius West, was recovered by outside linebacker Denzil Ware, who ran 20 yards for a touchdown. The Wildcats entered the fourth quarter leading 24-17.

However, Stoops does hope to improve offensively for the upcoming game.

EKU started their season 0-1 after falling 31-17 to another in-state rival, Western Kentucky University. The Colonels will play their second game in their home-state of Kentucky. They have yet to have a home-opener.

Redshirt senior quarterback Tim Boyle completed 63 percent of his passes (29-of-46) at WKU. Boyle tossed two touchdown passes for a total of 320 yards. However, WKU scored two back-to-back touchdowns early in the second quarter allowing the Hilltoppers to finish the half 17-0. The Colonels were unable to bridge the gap on the scoreboard.

Despite EKU’s loss to WKU, University of Kentucky Head Coach Mark Stoops says the Cats will have to bring their A-game.

#EKUFootball takes on @UKFootball this Saturday at Noon (EST). Catch us on @SECNetwork if you can't make it to the game! #FireTheCannon pic.twitter.com/i9obO5OaVs

Kate Venezio is a fourth-year telecommunication-news student at the University of Florida. Kate does it all: Behind the camera she captures emotional moments as a photographer for the University of Florida Athletic Association. She's comfortable being in front of the camera, too. Kate interviews players, coaches, fans and family members for pre- and post-game coverage as a beat reporter for ESPN Gainesville/WRUF-FM. In addition, Kate produces the sports segment for the weekly WUFT News program. There, she's responsible for writing the script in its entirety to include production commands. The presentation includes video highlights and interviews taped and edited, and Kate then live anchors the final package on a daily deadline. In addition, she writes stories for wruf.com where she informs sports fans of local, state, and national trending topics. Kate also utilizes social media as a tool to help get the stories in front of viewers.
@@kate_venezio
Previous CFB Preview: No. 1 Alabama Takes on Fresno State
Next Area High School Football Games Moved