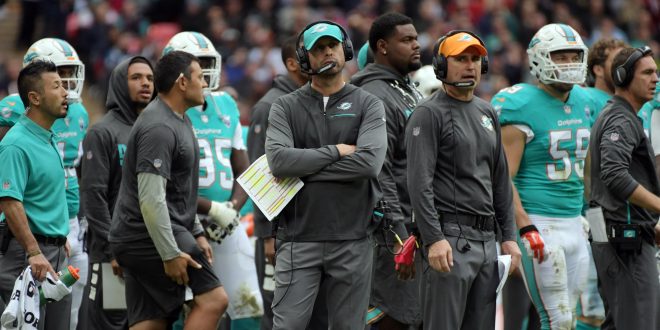 Both the Jaguars and the Dolphins struggled in Week 4 of the NFL season, falling to the Jets and Saints respectively.

The Jacksonville Jaguars fell to 2-2 on the season after a 23-20 overtime loss to the New York Jets. After holding a 10-7 lead, Jacksonville gave up 13 unanswered points to go down 20-10 heading into the fourth. The team scored 10 points in the fourth quarter to force overtime behind an 81 yard fumble recovery for a touchdown by linebacker Myles Jack and a 22 yard field goal with 46 seconds left. After both teams failed to score for almost the entire overtime period, Jets’ kicker Chandler Catanzaro nailed a 41 yard field goal with 28 seconds left to win the game.

Jacksonville struggles on both sides of the ball

The Jags offense failed to put up points for the majority of the game, only scoring one touchdown on a Blake Bortles pass to rookie running back Leonard Fournette. While Fournette once again had a strong performance, quarterback Blake Bortles had a poor outing. The fourth-year QB completed only 15 of 35 passes for just 140 yards along with a touchdown and an interception. The Jacksonville defense didn’t perform much better than their offense. The team allowed 471 total yards, including 256 yards and two touchdowns on the ground. Jets’ running back Bilal Powell ran the ball 21 times for 163 yards and touchdown and had a 75 yard touchdown run in the first quarter. Elijah McGuire also ran for 93 yards on 10 carries, including a 69 yard touchdown in the third quarter.

Dolphins get shut out

The Dolphins lost to the New Orleans Saints in London early Sunday morning by a score of 20-0. The Dolphins defense did it’s job on Sunday in the first half, holding the Saints to just 3 points at halftime. However, the Fins’ offense was nowhere to be found. Miami had a good opening drive, marching all the way to the New Orleans’ 4 yard line until quarterback Jay Cutler threw an interception on 1st and Goal. Following that scoreless 81 yard drive, the Dolphins punted on their next six possessions and didn’t have a drive longer than 22 yards. The Saints scored a touchdown in the third quarter and put up 10 more points the fourth quarter. Dolphins’ head coach Adam Gase said that the the team is frustrated on offense.

For a second straight week, the Miami offense found virtually no success. Miami has scored a combined 6 points in their last two games and is averaging just 8.3 points per game. The teams is struggling to move the ball and execute on offense. Miami has converted on only 2 of 20 third downs in the last two games and ranks last in the NFL in third down conversions. As a team and individually, the Dolphins are massively under-performing. Despite the offensive failure, Jay Cutler doesn’t think the Dolphins should be panicking.

The Jaguars will travel to Pittsburgh next week for a match-up with a talented Steelers team. Jacksonville will have to focus on containing the Steelers’ star players and must execute on offense to pull out a Week 5 win. For the Dolphins, they will host the Tennessee Titans at home. Adam Gase has a lot to figure out before Miami takes the field on Sunday if they are going to improve to a 2-2 record.

Both the Jags and the Dolphins kick off at 1 p.m. ET on Sunday.