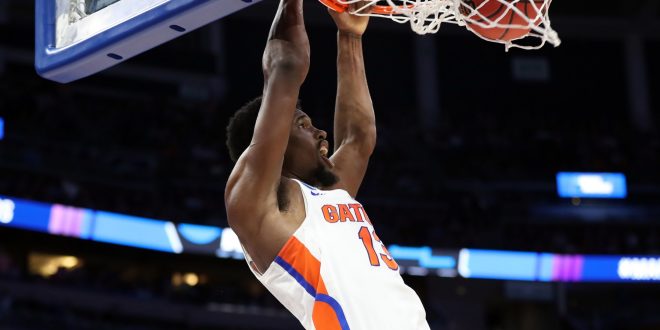 The Florida Gator basketball season is right around the corner as their season opener is November 11th against Gardner-Webb.  Losing four seniors from last season, the Gators will look for players to step up in big ways to fill in the void. Florida Gator Center Kevarrius Hayes is one of them.

Last season, Hayes averaged 6.3 points per game and 4.4 rebounds per game in 36 appearances with 16 starts.  Though, he has shown star potential as he blew Oklahoma out of the water scoring 20 points, nine rebounds and three blocks in 23 minutes. However, he received limited minutes in the first half of the season.  That all changed on February 14th, when John Egbunu tore his left ACL against Auburn.  Hayes was asked to take a big step up and played significantly more minutes.  Hayes played 25 minutes once prior to Egbunu’s injury, but reached or exceeded that mark seven times over the span of the Gators last ten games.  With the gained experience from last season, Hayes could be a valuable asset to this years team.

Hayes’s Views on the Upcoming Season

This year Hayes will be one of the veterans and will be looked towards to make plays. Hayes believes that he can improve on being more consistent on the offensive end this season.  Hayes seemed very convinced that this team will be good this year.  The Gators will have a lot of players to replace but return KeVaughn Allen, Chris Chiozza, & John Egbunu.  Though, Hayes seems excited to play with incoming freshman Chase Johnson who reminds Kevarrius a little of himself.

The Gator basketball season starts in just a little over a month.  The Gators will play in some marquee match-ups as they play in the PK80 challenge and non-conference games against Florida State, Cincinnati, Clemson, and Baylor.  This season will be a lot of fun and has many twists and turns as the Gators aim to end their season in San Antonio for the Final Four.