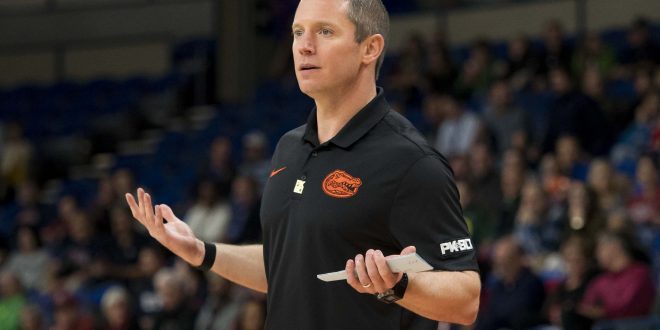 No 7 Florida’s 111-105 double-overtime victory over No. 17 Gonzaga could be simply described as a battle of attrition. Unfortunately, this was no simple game. Two overtimes, 17 lead changes and 216 total points encapsulated the madness that ensued between the Bulldogs and Gators on Friday night/early Saturday morning.

Chris Chiozza and Jalen Hudson both set new career-highs in scoring. Hudson finished with 35 points on 11-20 shooting from the field, knocking down 8-12 shots from beyond the arc. Chris Chiozza recorded his second straight double-double, posting 26 points, 10 assists and 8 rebounds. Jalen Hudson, Chris Chiozza and KeVaughn Allen combined for 84 of Florida’s 111 points. For the first time in program history, the Gators scored 100 points or more in four of their first five games.

Johnathan Williams led the Bulldogs with a career-high 39 points, scoring 37.1% of Gonzaga’s total points. The Bulldogs outscored the Gators, 52-24, in the paint but lost the assist battle, 22-17. Florida averaged 1.22 points per possession, while Gonzaga averaged 1.14.

Florida will advance to the finals of the Motion bracket of the PK80 Tournament, taking on Duke on Sunday at 10:30 PM ET. The Blue Devils took down the Texas Longhorns, 85-78, on Friday, overcoming a large second half deficit.

Chris Chiozza is essentially a punt returner playing basketball. Always on a decline. Always dangerous. Shot out of a cannon.

Florida opened the game sloppy and loose with the basketball. The Gators committed three turnovers in the first four minutes of the game as the Bulldogs took a 9-4 lead with 15:59 remaining in the first half. Gonzaga knocked down two of their first three shots from beyond the arc.

An 11-0 Gators run gave Florida a 15-13 lead with just under 12 minutes remaining in the first frame. The Gators hit 6 of their first 10 shots from the field.

Florida extended their lead to four with 7:31 left in the first frame. The Gators outrebounded the Bulldogs, 11-8, during the first 12 and a half minutes of play and outscored them in the paint, 12-8.

The Bulldogs took a two-point lead with 6:35 left in the first half on a Johnathan Williams three-pointer. The lead came after a 6-0 run.

Egor Koulechov’s slow start on offense contributed to Gonzaga’s lead. Koulechov opened the game 0-6 from the field as the Bulldogs took a six-point lead with 2:17 left in the first twenty minutes.

Florida missed 12 of 14 shots to end the first half. Gonzaga took a 36-29 lead into halftime as Johnathan Williams and Killian Tillie combined for 22 of the Bulldogs’ 36 first half points.

Not to overreact off one game, but it's clear I underrated both Florida and Gonzaga a bit in the preseason. Florida has guards and experience, Gonzaga has Perkins/Williams and its usual slew of intriguing prospects.

Egor Koulechov missed all seven of his shot attempts in the first half. KeVaughn Allen led the team in first half scoring with 7 points, but went 2-7 from the field. Jalen Hudson only took two shots in the first twenty minutes, sinking both of them.

The Gators opened the second half on a 13-5 run. Keith Stone and Jalen Hudson combined for 10 of Florida’s 13 points as UF sunk five of their first seven shots to start the half.

Florida took a 53-49 lead with 10:50 left on a Jalen Hudson catch-and-shoot, corner three-pointer. Hudson scored 14 of his first 18 points in the second half.

UF entered the bonus with 9:38 remaining in the contest. The Gators took a six-point lead, their largest lead yet, on a Chris Chiozza lay-up with just under nine minutes remaining. A 7-0 Gonzaga lead quickly followed as the Bulldogs took a one-point lead with 7:42 left in the game.

At the under-4 minute media timeout, Gonzaga held a one-point lead. Six straight makes contributed to the Bulldogs’ lead.

KeVaughn Allen tied the game at 78 with 22.4 seconds left on a contested reverse lay-up. The bucket notched Allen his 15th and 16th point of the game.

A 6-0 run, featuring a Chris Chiozza three-pointer and three straight made free throws by KeVaughn Allen, gave the Gators a four-point lead with 2:13 remaining in overtime.

Josh Perkins’ three-pointer with 48 seconds left in overtime tied the game up at 91 points apiece. The shot was Perkins third three-pointer of the contest.

A crazy sequence ensued as Chris Chiozza completed an and-1 with under 10 seconds remaining in the game. The Gators took a two-point lead on the free throw. Then, with 1.8 seconds left in overtime Silas Melson knocked down a lay-up with the foul, but missed the free throw.

Egor Koulechov grabbed the rebound on the missed free throw, but would travel in the process of attempting a three-quarter court, game-winning three-pointer with .7 seconds left. Melson had an open look for Gonzaga at the buzzer from beyond the arc but missed short. The game continued to double overtime.

With 2:30 left in double overtime, Jalen Hudson nailed a contested three-pointer in the face of Johnathan Williams to give the Gators a 100-97 lead. The made shot gave Hudson his 32nd point of the night, tying his previous career-high.