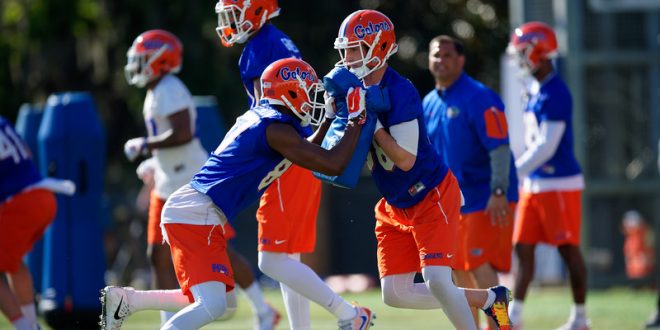 Gator football is back. The first two days of spring practice took place on March 16th and 17th and were both open to the public. After head coach Dan Mullen’s most recent press conference, many Gator fans were left feeling excited about the upcoming season. However, there are other people who are even more excited than the fans about this season and spring practice: The players.

Left tackle Martez Ivey will be returning to UF for his senior year. Even though Ivey could have declared for the draft, advice from offensive line coach John Hevesy persuaded Ivey to stay. This means Ivey will have to learn a brand new offense with a third different line coach, but Ivey seems up to the task. One of the biggest changes Ivey is excited about with the new coaching regime is the shift in discipline.

With tight end DeAndre Goolsby gone, redshirt-senior tight end C’yontai Lewis is the most experienced tight end on the roster. Lewis has great athleticism and is a more than capable run blocker, but he still has to prove himself. However, like Martez Ivey, Lewis is excited about the new coaching staff, especially Dan Mullen’s energy levels and work ethic.

Redshirt-sophomore quarterback Feleipe Franks believes the team will thrive under Mullen’s new system as well. After last season’s debacle, Franks took some time off to reflect on what went wrong last season. He decided the Gators needed to put last season in the past, and focus on how they can find success in 2018, starting with successful spring practices.