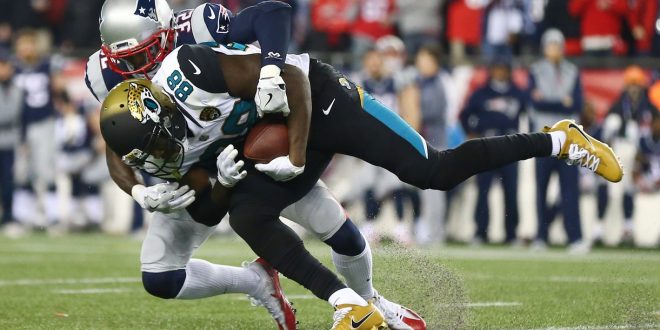 The NFL draft is around the corner which means that it’s time for teams to make some decisions. For the Jacksonville Jaguars, they are using free-agency to their advantage. The Jags ended the 2017-2018 NFL season by winning their division to clinch a spot in the postseason. Their postseason ended with a 20 to 24 loss against the Patriots. With players coming and going, this team already has the 2019 playoffs in mind. Accordingly to ESPN Jaguars beat reporter, Michael DiRocco, it’s time for the Jaguars to make some smart decisions.

It's all coming together for 2018. pic.twitter.com/pkXMQWxa3U

The Jags have already gotten a head start to build their team for the next season. Recently, the Jags lost a widereciver and a linebacker but gained a guard among other new players. Andrew Norwell from the Carolina Panthers is among those new additions to the Jaguars roster. DiRocco claims that this move by the Jacksonville Jaguars may be underrated, but it’s one of the biggest moves this free-agency season.

While the franchise is adding to the roster, the Jaguars are saying goodbye to some players. Wide receiver, Allen Hurns, signed a two year deal with the Dallas Cowboys. After 7 seasons with the Jaguars, Paul Posluszny will be another player that the team will miss. The Jags will lack in leadership temporarily with the loss of their linebacker, but that will give another player the chance to take his place.

With the NFL draft about a month away, they are looking into potential draft picks. Now that the franchise has gained new players in the free agency, there’s only one thing they are missing. According to DiRocco, now the Jags need to find another tight end.

The upcoming season holds potential for the Jaguars. Whether they get a tight end or not, one thing is clear; this season is a pivotal moment for the Jackonsville Jaguars.