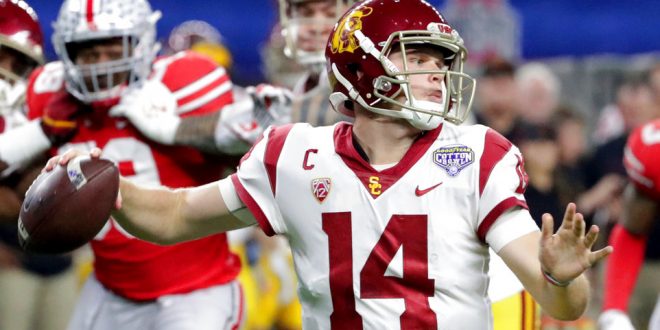 The Mystery of Sam Darnold

Coming into the 2017 college football season, Sam Darnold looked like a surefire lock for the No. 1 overall pick in the 2018 NFL Draft. The 6’4″, 220-pound signal caller appeared to have all the skills and intangibles to lead an NFL team from the depths of the league to at least a slightly better season. On Tuesday, April 24, two days before the NFL Draft, things couldn’t be more unclear. As Benjamin Franklin once said, “the only sure things in life are death and taxes.”

When Sam Darnold is drafted later this week, he will become the youngest quarterback selected in the first round since the 1970 merger (20-years-old).

With the emergence of quarterbacks Josh Allen and Josh Rosen, along with the intrigue surrounding running back Saquon Barkley, the 2018 NFL Draft is certain to be one of the most unpredictable drafts in recent memory. In order to get a sense of where Darnold may end up, we’ve listed several of the top mock drafts below.

Despite all the hoopla surrounding his draft position, Darnold said that he doesn’t care where he’s selected and is ready to begin the next step in his journey.

"I think my play style is a little bit like Rodgers and Romo.”

Sam Darnold tells @sportsreiter who he models his game after. pic.twitter.com/P6p8rGiOnA

Sam Darnold’s college showcase was impressive but had significant fluctuations between his redshirt freshman and redshirt sophomore years. During his freshman year Darnold tossed 31 touchdowns, 9 interceptions and completed 67.2% of his passes en route to 3,086 passing yards. Darnold’s sophomore year featured fewer passes completed (63.1%), fewer touchdowns (26 TD) and more interceptions (13 INT). The only improvements Darnold made were in yards (4,143 passing yards) and yards per attempt (8.4 YPA to 8.6 YPA). Turnovers have increasingly become the biggest knock on Darnold’s professional prospects. The former Trojans quarterback discussed the issue earlier this week.

Sam Darnold has been given more comparisons than just about any quarterback prospect in the 2018 NFL Draft. NFL.com’s Daniel Jeremiah reported that in an interview with 5 anonymous NFL general managers, two compared him to Tony Romo, one compared him to Jarred Goff, another reminded him of Brett Favre and the last GM said he was similar to Ryan Tannehill. NFL.com’s Lance Zierlein compared him to Andrew Luck, while WalterFootball.com said he was most similar to Phillip Rivers. The projections and speculation around Darnold seem to be endless. Former UCLA coach Jim Mora even said on NFL Network that he’d take Darnold over his former quarterback Josh Rosen in the NFL Draft if he were the Cleveland Browns. Darnold responded to those comments earlier this week.

A release time faster than Derek Carr on a 52 mph throw?
Sam Darnold isn't worried about his throwing motion.