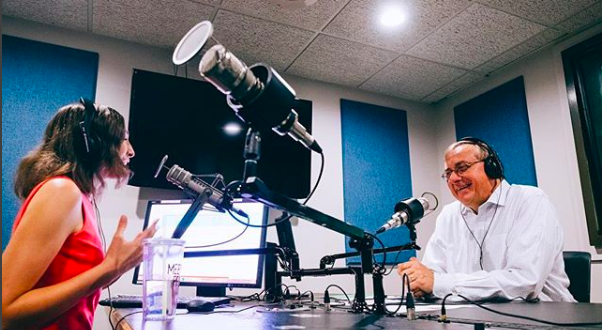 Wednesday morning marked the first day of the 2018-19 school year at the University of Florida. A new school year calls for the start of Gator sports. On Monday, for the first time in almost four years, UF’s President Kent Fuchs attended a Gator football practice.

“I didn’t really understand what was going on, but it looked like the team was well prepared,” Fuchs said.

Take a look for yourself:

Even though Fuchs “didn’t really understand what was going on,” he still believes in the Gators.

Fuchs may not be an ESPN analyst, but still gives his own take on all Gator sports. He said he stopped trying to predict scores, but said the Gator football team will open the season with a win against Charleston Southern on Sept. 1.

With a new head coach comes great excitement. Fuchs said Florida Head Football Coach Dan Mullen is taking the new job to a new level. He’s even mentioned the fact that he has had to elevate his own “game” when trying to meet students.

Not Just Football for Fuchs

Football isn’t the only sport in action: Gator soccer opened its season earlier this month and is undefeated (3-0). Fuchs said, “they look like they have a great, great team this coming year.” The Florida soccer team is ranked No. 12 overall in the NCAA Division I rankings.

Gator volleyball’s season-opener is Friday at No. 2 Nebraska. In the AVCA Preseason Coaches poll, the Gators are No.7.

The Florida Gators have a total of 40 national championship titles; 20 in men’s and 20 in women’s. All Florida teams have a combined 240 SEC championships.

From these stats, it seems like President Fuchs knows what he’s talking about. When each Gator sports season begins, you can bet that UF’s big leader will be seen sporting the Orange and Blue at each game.

Kate Venezio is a fourth-year telecommunication-news student at the University of Florida. Kate does it all: Behind the camera she captures emotional moments as a photographer for the University of Florida Athletic Association. She's comfortable being in front of the camera, too. Kate interviews players, coaches, fans and family members for pre- and post-game coverage as a beat reporter for ESPN Gainesville/WRUF-FM. In addition, Kate produces the sports segment for the weekly WUFT News program. There, she's responsible for writing the script in its entirety to include production commands. The presentation includes video highlights and interviews taped and edited, and Kate then live anchors the final package on a daily deadline. In addition, she writes stories for wruf.com where she informs sports fans of local, state, and national trending topics. Kate also utilizes social media as a tool to help get the stories in front of viewers.
@@kate_venezio
Previous Decision Looming in Urban Meyer Case
Next High School Football: Santa Fe Hopes Rebuild Begins On Friday