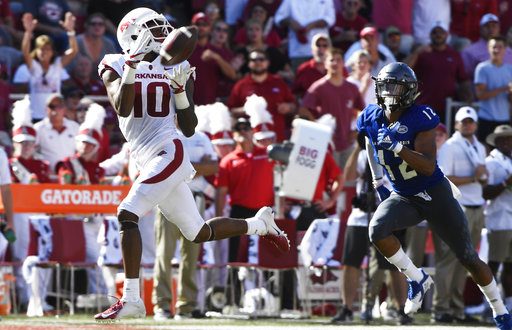 The Arkansas Razorbacks will take on the Colorado State Rams this week. This will be an interesting match-up as the Rams have something to prove, and the Razorbacks have corrections to make.

Coming off a nice win at home against Eastern Illinois University (55-20), the Razorbacks are excited to go on the road to take on the Rams. Colorado State is currently 0-2 after facing some very advanced teams in August. Arkansas head coach Chad Morris has prepared his team to face a set of eager players, knowing that Rams head coach Mike Bobo will be going back to the basics to ensure his men are ready to face a talented offensive line.

Following two difficult losses, Rams head coach Mike Bobo is gearing up to face some tough teams in the coming weeks. They previously faced Hawaii and Colorado, two teams with strong offenses. With Arkansas and No. 25 Florida up next on their schedule, the Rams will dive deep into the SEC looking to toughen up their team before they take on their own conference match-ups. It will be good preparation for some of their fresher players.

Keep your eyes on Colorado State quarterback K.J. Carta-Samuels, who went 34-50 for 537 yards and six touchdowns two weeks ago against Hawaii. He will be matched up against Arkansas quarterback Ty Storey, who went 12-17 for 261 yards and three touchdowns last week against Eastern Illinois. Carta-Samuels will need to tighten up his game to stand up to Arkansas’ defense and to prepare his men to face the Florida D-line next week.

Arkansas has a 88.6% chance of beating Colorado State according to ESPN’s Football Power Index.

Watch the Colorado State Rams host the Arkansas Razorbacks on Sept. 8 at 7:30pm EST on CBSSN.