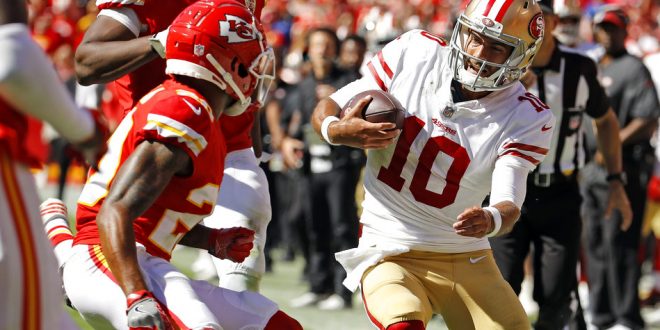 Garoppolo Out for the Season With Torn ACL

The San Francisco 49ers are facing a major set back after an MRI on Monday. The MRI confirmed that starting quarterback Jimmy Garoppolo will be out for the season after tearing his left ACL late in Sunday’s 27-38 loss to the Kansas City Chiefs.

Garoppolo’s injury occurred while he attempted to scramble for extra yardage along the left sideline on a third-and-goal late in the fourth quarter. While continuing to gain yards, Garoppolo attempted to cut back and avoid Chiefs defensive end Justin Houston rather than stepping out of bounds. Garoppolo took an awkward step on his left leg, causing the injury. The injury comes after Garoppolo showed signs of continuing his success from last season. He finished the season with 96.2 passer rating and led the 49ers to five straight victories. Garoppolo threw for 2 touchdowns and 251 yards against the Chiefs.

Jimmy Garoppolo scrambles on third down and takes a big hit before he can get out of bounds. He’s injured on the play. #49ers #SFvsKC pic.twitter.com/yYlrg9haTO

The Chiefs have been plagued with injuries this season including notable injuries to running back Jerick McKinnon, cornerback Richard Sherman, and free safety Adrian Colbert. McKinnon also suffered a season-ending ACL tear during the preseason. Chiefs head coach Kyle Shanahan expressed the significance of losing players such as Garoppolo and McKinnon.

Despite the loss of Garoppolo, coach Shanahan is confident in the abilities of 2nd-year backup quarterback C.J. Beathard. Last season Beathard threw 1,430 yards and four touchdowns in seven games with the 49ers.

Garoppolo signed a five-year $137.5 million deal with the 49ers after being traded by the New England Patriots

The 49ers look to get their second win of the season this Sunday when they take on the Los Angeles Chargers.