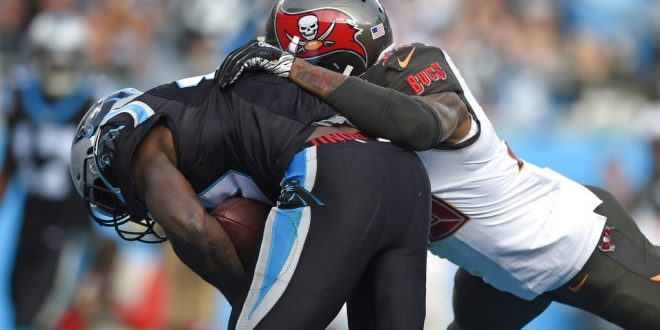 On Sunday, the Tampa Bay Buccaneers entered Bank of America Stadium looking for their second division win. However, it didn’t happen.

The Carolina Panthers dealt Tampa a swift blow in a 42-28 loss. It was the Buccaneers fifth loss in the last six games.

Quarterback Ryan Fitzpatrick made history despite the loss. But when Tampa’s offense gave them the chance to win, their own defense gave it away.

It’s becoming a broken record at this point. It’s no secret that the Buccaneers defense hasn’t been much a threat this season.

They fired their defensive coordinator Mike Smith three weeks ago, less than halfway through the season and the situation still hasn’t gotten better.

Tampa’s defense gave up a total of 407 yards and six touchdowns to Carolina. Head coach Dirk Koetter commented on their performance.

The Magic Wasn’t Enough to Win, But…

Fitzpatrick threw for 243 yards and four touchdowns with two interceptions on Sunday. And although that wasn’t enough to seal the win for Tampa, it was enough to etch his name in Tampa’s record books.

QB Ryan Fitzpatrick now has three games this season with four touchdown passes – the most such games in a single season in team history.

But despite the loss, the Buccaneers announced that Fitzpatrick will remain the starter going into Week 10.

“Ryan’s our starter next week. Ryan had one [bad play] there in the first half – an overthrow on that one interception that we’d like to have back – but did a good job of leading us back,” Koetter told ESPN. “That second interception, he was trying to get a big play to DeSean [Jackson], but Ryan did some good things today.”

The first half of the NFL season has not been kind to the Buccaneers. They now sit at 3-5 on the season and are last in the NFC South.

The Buccaneers will host the injury-ridden Washington Redskins, who are coming off a blowout loss to the Atlanta Falcons at home, on Sunday.

Camille Woodhouse is a Sports and Media student at the University of Florida College of Journalism and Communications. In the past, she has covered the Atlanta Falcons and Florida Gators football for various sports news outlets. She is an Atlanta native and a fan of football.
@CJW_SportsRadio
Previous SEC Divisions Clinched, Alabama in League of its own
Next Gourde, Point the Heroes as Lightning Come From Behind, Grab OT Win in Ottawa