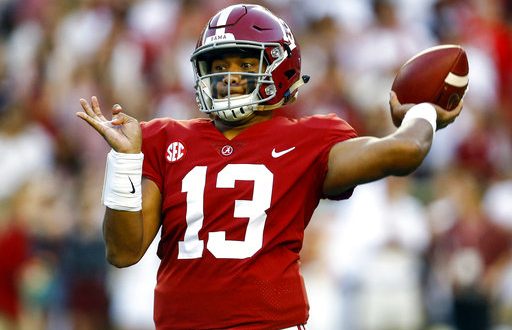 The No. 1 Alabama Crimson Tide take on the No. 16 Mississippi State Bulldogs Saturday at 3:30 p.m.

The books favor Alabama by a whopping 24 points. That’s…a lot. Seriously, even for Alabama, 24 points is a lot to be favored by. But if you look at every game in the Tide’s season, there’s never been a margin closer than 22 points.

Against Texas A&M, they won 45-23, the closest game all season. In that contest, quarterback Tua Tagovailoa threw for 387 yards and four touchdowns.

Head coach Nick Saban says his team is prepared for a dogfight.

In a primetime game against No. 3 LSU last week, Tagovailoa had his worst game – 295 yards, two touchdowns and his only interception of the season. He has a 27-to-1 touchdown-to-interception ratio and is a bonafide Heisman candidate.

Well, let’s look at the stats.

MSU has three losses on the season, none more egregious than its loss to UF. The Bulldogs mustered just six points, and the Florida defense absolutely stonewalled them.

Quarterback Nick Fitzgerald went 11-for-26 for 98 yards while getting 20 carries for just 32 yards. If that MSU team shows up, the Bulldogs have absolutely no chance.

Conversely, if Mississippi State shows up as it did against No. 16 Texas A&M a few weeks ago, it at least has a chance to cover. In that one, Fitzgerald played much-improved football, going 14-for-22 for 241 yards and two touchdowns. He also received 16 carries for 88 yards and two more touchdowns.

Here’s the skinny though: Mississippi State probably won’t cover. The defense is good enough to keep them within 24, but this Alabama team isn’t like Alabama teams of the past. It was always, “When Alabama gets a quarterback, then it will be a complete team.”

Well, now Alabama has one – Tagovailoa – and it is legitimate. The Tide are going to roll all over the Bulldogs. It shouldn’t be a surprise if they win by at least 40. Expect them to drop at least 50 by the time the clock hits zero.

Chris O'Brien is a rising sophomore at the University of Florida. He aspires to be an on-air sports anchor someday.
Previous Kentucky Looks for First Road Win Versus Tennessee Since 1984
Next Florida QB Kyle Trask Suffers Injury, Carted off Field