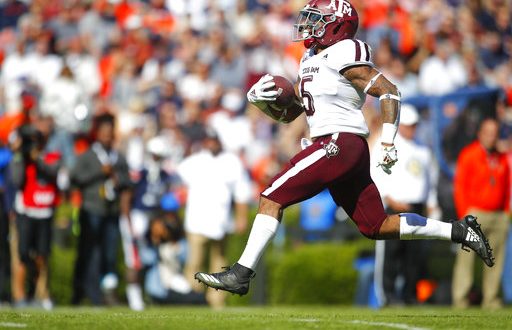 Texas A&M running back Trayveon Williams (5) rushes for a touchdown against Auburn during the first half of an NCAA college football game, Saturday, Nov. 3, 2018, in Auburn, Ala. (AP Photo/Todd Kirkland)

The Ole Miss Rebels and the Texas A&M Aggies will face off this Saturday in an SEC matchup in College Station. Both teams are 5-4 on the season. Each is looking to avoid a three-game losing streak.

“I have a lot of respect for Coach Fisher and Texas A&M. [They’re] a very, very good football team, very good on defense, physical, hard to run on,” Luke said. “They do a great job of ball control on offense and mixing it up between the run and the pass. Huge challenge but one we’re looking forward to.”

A strong suit for the Rebels has been the passing game. Quarterback Jordan Ta’amu has an SEC-leading 3,001 passing yards this season. Luke said he feels his quarterback has shown good development throughout the season.

Ole Miss has played well at Kyle Field in recent years, leaving College Station with a win in their last two trips.

After three games on the road, the Aggies are returning home to College Station. Jimbo Fisher’s team has undergone a bit of a rough stretch as of late. The Aggies are 3-3 in SEC play, having dropped their last two SEC meetings. Last week’s game against Auburn saw Texas A&M with the lead, but they could not hold off a late comeback push from the Tigers.

Fisher said Ole Miss is a very dynamic team and will provide a challenge for his defense. Fisher said his defense will need to create pressure to hold off the Rebels.

Saturday’s matchup will air on CBS with kickoff at 12 p.m.

Born and raised at the ballpark! Typically quiet- until it comes to sports. I'm a South Florida native with a passion for baseball nearly as strong as my faith. Grew up in garnet + gold, turned out sporting orange + blue. Likely to be found with a camera. And yes, I take food pictures.
@victoriarossman
Previous Duke’s Top 3 Freshmen in the Country Dismantle Kentucky
Next Mizzou and Vandy Look For Second Straight Conference Win