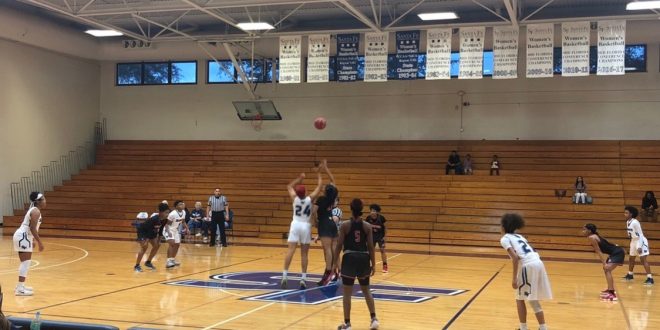 The Saints were down 5-4 at the beginning of the 1st quarter and then went on a 6-0 run, never looking back. Santa Fe was led by guard Stephanie Jackson with 16 points, shooting 7-12 from the field. Plus, forward Camille Pringle shot 50% from the floor.

The Saints played great team basketball with great ball movement assisting on almost half of the shots they took. Guards Stephanie Jackson and Danasia Bogle had great passing, not settling for shots, and getting the ball into the paint.

The Saints got the ball to posts Camille Pringle and Destiny Williams for easy layups. Santa Fe had 30 points in the paint. A defensive switch from a 2-3 zone to a trap forced Albany to have a total of 27 turnovers in the game and gave the Saints 19 steals.

The team chemistry gave the Saints a 20 point lead going into halftime.

The Saints dominance didn’t stop in the second half. The team scored 30 points in the 3rd quarter.

The second half began with 2 quick steals by #3 Janasia Law and then a drained 3 pointer. The Saints rolled through the rest of the game also recording 17 offensive rebounds and 20 second-chance points.

The Saints led by 39 at one point in the game.

“If you take pride in how you do things and not what the scoreboard says, then 30 points just happens and you don’t know that it’s happening,” said head coach Chanda Stebbins.

Stebbins also said that she thought the ball movement and being unselfish in the 3rd quarter really helped the team maintain their lead.

With this win, the Saints move to 16-7 overall and have a six-game win streak. They will face Florida State College on Saturday, February 9.