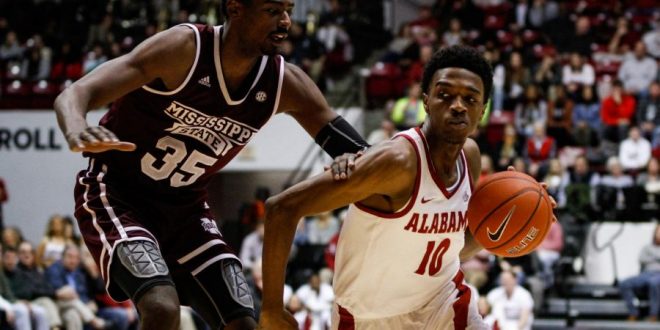 The Mississippi State Bulldogs and Alabama Crimson Tide will face off in Starkville on Tuesday night at 9:00 p.m. Both teams are currently stuck in the middle of SEC mediocrity. Alabama is 6-4 in the conference, while Mississippi State is 4-6.

In the first meeting between these two teams this season, Alabama won 83-79. Donta Hall led the Crimson Tide with 19 points and 7 rebound on only 9 shot attempts. John Petty added 13 points.

For the Bulldogs, Reggie Perry had 18 points and 7 rebounds. Quinndary Weatherspoon and Lamar Peters each contributed 14 points apiece.

The Bulldogs have been ranked in the top 25 for most of the year. However, they have fallen out recently after losing three of the past four games.

The Bulldogs have the 18th best offensive efficiency in the country. They are led by Quinndary Weatherspoon, who is widely considered as one of the best guards in the SEC. The senior is averaging 17.9 points, 5.5 rebounds, 2.5 assists and 1.5 steals per game while shooting 49.5% from the field and 37.9% from beyond the arc.

Defensively, the Bulldogs are above average. According to Kenpom, they have a defensive efficiency of 97.6, which ranks 69th in the country. They also rank in the top 25 in steal percentage and block percentage. They rank in the top 4 in the SEC in steals and blocks per game.

While the Bulldogs are known for their offensive firepower, they certainly hold their own defensively.

What to Expect From Alabama?

The Crimson Tide are paced by Kira Lewis Jr., John Petty and Donta Hall. Lewis Jr. is leading the team with 14.3 points per game. Petty is averaging 11.7 points per game and Hall is putting up 11.0 points, 8.7 rebounds and 1.8 blocks per game.

They rank in the top 70 in offensive and defensive efficiency. Like the Bulldogs, they are better on the offensive end. The Crimson Tide grab 38.7 rebounds per game, which is 3rd in the SEC. However, they gave up 19 offensive rebounds to the Bulldogs in their matchup a few weeks ago. Alabama must control the defensive glass this time around.

They don’t do anything exceptionally well on the defensive end, but they are still an above average defensive team. They have a block percentage of 12.7%, which is 40th in the country. Much of this defensive interior presence comes from 6’9″ Donta Hall. Overall, Avery Johnson has a history of putting together good defensive teams with limited defensive talent.

The game will be played in Starkville at 9:00 p.m. Mississippi State is currently a 5.5 point favorite. It is being aired on SEC Network.

Previous Gator Softball Unveils Renovated Stadium
Next SEC Match Up Georgia On The Road, Hosted By The Aggies