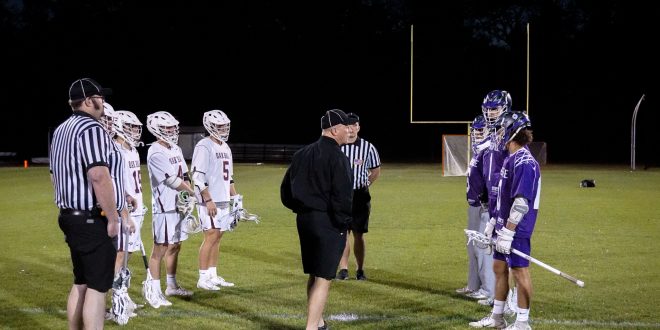 The Eagles rode an impressive run stemming from excellent passing and shooting from seniors #5 Ryan O’Leary and #4 Bradley Vincent. The two combined for 13 total points (goals and assists) en route to the Oak Hall victory.

Defense played a key role in deciding this game, as Oak Hall allowed only 7 shots all game long, while Gainesville High School allowed the Eagles to shoot 34 times.

Gainesville High School came out of the gate ready to upset the Eagles, coming out causing turnovers and passing effectively to keep possessions going. The Hurricanes scored what would be their only goal of the game in the first quarter; an iso post-up from #1 J.T. Hayes.

The Hurricanes’ goalie Greg Sulander made may miraculous saves. One save included body-checking an Oak Hall attack-man into the ground to save a wide-open goal in the waning seconds of the first quarter.

Oak Hall struggled in passing the ball defensively in this quarter, dropping clearing passes regularly. Unable to clear the ball, the Eagles gave the Hurricanes many more opportunities to score. The Hurricanes would get 4 shots on goal this quarter, which is more than they would get in the next three quarters combined.

Oak Hall coach Jonathan Montes did not like his team’s slow start to the game. He told his players at the end of the first quarter:

“I need more energy, I need more effort, I need excellence.” -Coach Montes to his players at the end of a close first quarter.

Gainesville High School struggled to keep up, turning the ball over often and struggling to keep possession. The Eagles won every single face-off in the second and third quarters, which only piled on to the Hurricanes’ possession woes.

Oak Hall’s #5 Ryan O’Leary also scored 4 goals in the third quarter to put the final dagger into the Hurricanes’ hopes of mounting a comeback.

Once Oak Hall passed the 12 goal lead threshold, the clock ran and the game was over quickly. Both Oak Hall and Gainesville High School were able to play many underclassmen and bench players for experience near the end of the game.

Right down the road

While the smaller school, Oak Hall’s lacrosse program quickly gained notoriety as one of the best programs in the state for lacrosse. Gainesville High School, while the bigger school, has a noticeably smaller program.

According to Hurricanes’s head coach Evan Milch, most of the guys in his program play a second or even third sport. This is contrary to Oak Hall’s program, where most players play lacrosse year-round with club teams.

“A lot of these guys know each other, just being around in Gainesville and in youth ball.” – Coach Montes

Gainesville High School continues to improve despite their loss to Oak Hall. Before this game, their last two games were decided by a total of five goals.

Meanwhile, Oak Hall looks ahead to Maclay from Tallahassee on Feb. 28.