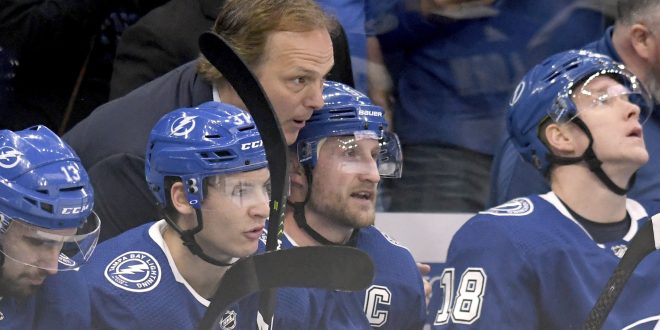 For the first time in NHL history, the Tampa Bay Lightning is your regular season champion. With only nine games left to go until the post-season, the Lightning holds 56 wins and 116 points to show for 2018-2019.

On Monday night, Tampa Bay had home-ice advantage, hosting the Arizona Coyotes at Amalie Arena. The Coyotes had an overall record of 36-30-6 before heading to Tampa, but there was no guarantee for the Lightning.

Arizona struck first, but Tampa Bay’s Steven Stamkos set the tone for the rest of the night. He scored his 384th goal and etched his name in the history books as a franchise leader.

The 384th one of these and you’re looking at your all-time franchise leader in goals.

However, the game was tied 1-1 at the end of the second period. In the third, Victor Hedman snapped one in the back of the net to put the Lightning up one. To close it out, two Tampa Bay players in Anthony Cirelli and Yanni Gourde hit empty netters with less than a minute to go. The Lightning left with its 56th season win and, of course, the regular season championship.

Stamkos’ franchise-leading goal was definitely something for Tampa fans to smile about, but the captain’s moment seems more like a cherry on top of an epic season. For example, the Lightning played the second-fewest games in NHL history to clinch the President’s Trophy.

Since being first awarded in 1985-86, only one team has required fewer contests to clinch the Presidents' Trophy than the @TBLightning (73 GP). #NHLStats #ARIvsTBL pic.twitter.com/YfcmhoO3CG

Besides that, Tampa Bay has amassed 116 points through 73 games, which leaves room for another smashed record. The all-time regular season point record is 132, courtesy of the 1996-1997 Montreal Canadiens (132).

However, winning the President’s Trophy is not necessarily completely positive. Out of the top five teams who won the regular season in 75 games or less, only one team took home the Stanley Cup. The last team to bring both pieces of hardware home was the 2012-2013 Chicago Blackhawks.

Next up, the Lightning will take on the Washington Capitals. Washington is currently tied for first in the Metropolitan Divison with 91 points. Last season, the Lightning clinched the Atlantic Divison but fell just short of the Stanley Cup Finals, no thanks to the Caps.

With the postseason on the horizon, the Tampa Bay Lightning has plenty of time to worry about the Stanley Cup. But right now, the team is reveling in the moment of winning the President’s Trophy.