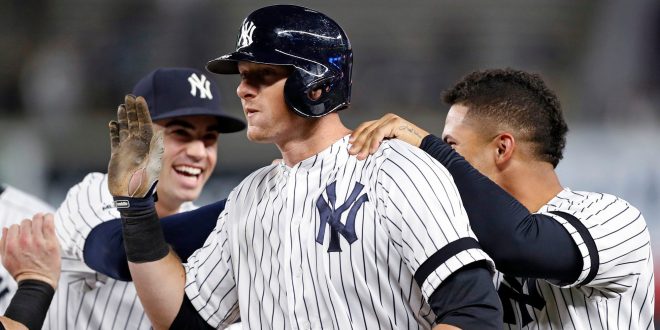 The New York Yankees handled the Baltimore Orioles on Wednesday to extend their winning streak to four games. Even after being hit with the injury bug early in the season, the Yankees have been resilient and impressive, to say the least.

Even without having Aaron Judge and Giancarlo Stanton, the Yankees are still finding plenty of ways to launch the ball offensively. Gary Sanchez leads the team with 15 home runs, while Torres and Voit have hit a combined 23. This Yankees team is filled with young talent and will be a serious threat to win it all once completely healthy.

Free agent acquisition DJ LeMahieu has looked like everything the Yankees wanted and more as he currently has the teams second-best batting average at .329. He also has 25 RBIs and ten doubles on the season.

Third basemen Gio Urshela has been on a tear offensively as he is hitting .340 with 15 RBIs in his last 30 games. The 27-year-old has provided a nice spark offensively for New York. Players such as Urshela and LeMahieu are new faces that have helped hold this team together, while the Yanks await the return of some star players.

Gleyber Torres continued to be on an absolute tear against the Orioles this year on Wednesday. Torres has batted .465 against Baltimore in 43 plate appearances. He has hit all but two of his 12 home runs this season against the Orioles.

Gleyber Torres against Baltimore in 2019: 20-for-41 with 10 HR. pic.twitter.com/EBDrTqLGoU

Being in only his second season for the Yankees, Gleyber Torres looks like a potential franchise player for the Yankees. For being 22 years old and having such success early is extremely impressive. Torres will be a nightmare for the MLB for years to come, especially in Baltimore if he continues his hot streak against the Orioles. Torres has had high praise from his coach as of late.

No other team in the MLB has seen more players injured this much during the season than the Yankees. Just a few names of several key injured players for the Yanks are Aaron Judge, Luis Severino, Giancarlo Stanton, and Dellin Betances.

Being out a former MVP, a Cy Young Finalist and a Rookie of the Year can usually break a team. Yet, the Yankees have still found ways to get hot and as of late they have been playing their best baseball. Being 8-2 in their last 10 games, the Yankees have made valuable strides in the AL East standings.

Luckily for the Yankees, their team has plenty of depth and diversity between young and experienced players. The current active roster has proved to be successful for the time being, however, the Yankees will need their top playmakers back come October.

Prior to today's game, the Yankees placed LHP CC Sabathia on the 10-day IL with right knee inflammation.