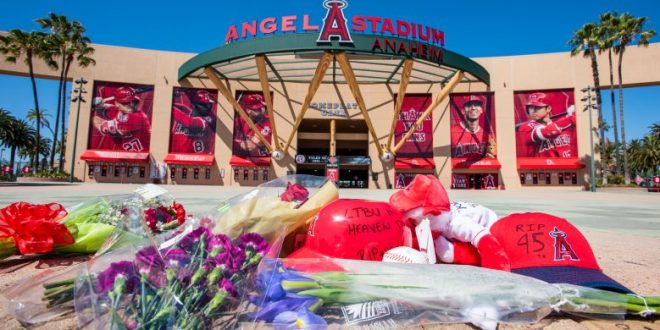 An impromptu memorial is set up on the pitchers mound outside Angel Stadium in Anaheim on Monday, July 1, 2019 in memory of Angel pitcher Tyler Skaggs who died in Texas at the age of 27. (Photo by Leonard Ortiz, Orange County Register/SCNG)

Bigger Than Baseball: MLB Mourns the Loss of Tyler Skaggs

Slated to play the Texas Rangers on Monday, the Los Angeles Angels flew to Southlake, Texas on Sunday. Announcing the team’s arrival, Angels pitcher Tyler Skaggs took to his Instagram posting a picture of him and his teammates donning cowboy hats.

However, Skaggs and the Angels’ visit to Southlake would end tragically, shaking the professional baseball world to its core.

In a statement from the Southlake Police Department, it was reported that there was an unconscious man in one of the rooms at the Hilton Hotel on Monday. The report was made at 2:18 p.m. with authorities and medical personnel arriving shortly thereafter. Once on scene, authorities identified the man as 27-year-old Los Angeles Angels pitcher Tyler Skaggs. Skaggs was pronounced dead at the scene. While the investigation is still pending, officials do not suspect foul play nor suicide.

Prior to the start of Monday’s contest, many players and coaches had already reported to the ball field; totally unaware of Skaggs’ passing. With four hours until the first pitch, players for both teams were corralled with the Angels being taken back to their hotel and the Rangers heading back into their clubhouse. Rangers general manager, Jon Daniels communicated with the MLB and both parties came to the mutual agreement to postpone Monday’s meeting.

The sports world was quick to react to Skaggs’ passing; from teammates to fans, many are mourning the loss.

The Los Angeles Angels issued a brief statement following the news on Monday.

Angels statement on the passing of Tyler Skaggs. pic.twitter.com/6XA2Vu1uWV

Considering the sensitivity of the situation, it is no surprise that the Angels’ clubhouse closed itself off from the media.

Words cannot express the deep sadness we feel right now. Our thoughts and prayers are with Carli and their families. Remembering him as a great teammate, friend, and person who will forever remain in our hearts… we love you, 45. pic.twitter.com/zCO8Ne01Gy

Padres second baseman, Ian Kinsler remembered Skaggs as a fierce competitor and “one of the guys”.

Back home in Anaheim, Angels fans are in disbelief. A memorial made of flowers and memorabilia has collected outside of Angel Stadium.

With so much still in question as far as the how Skaggs passed, it’s hard to say. The Southlake Police Department said they will continue to release information as it becomes available as the investigation is still on going. The Tarrant County Medical Examiner’s office will be performing an autopsy report on Skaggs today. Once the autopsy results come back, we should have a better understanding as far as this tragedy took flight.

As for the Angels players and organization, their road ahead isn’t as black and white. ESPN MLB Analyst Tim Kurkjian explains that the next step for the Angels is to put their uniforms back on.

Ainslie is a journalism major at the University of Florida where she specializes in Sports Media. Her main passion is college football as it was a huge part of her childhood. Ainslie serves as a current correspondent for the Ocala Star-Banner, a newspaper for the Ocala, Florida area. She currently covers Marion County high school sports.
Previous 15-Year-Old Gauff Upsets Venus Williams at Wimbledon
Next The USWNT Reaches Third Consecutive FIFA Women’s World Cup Final