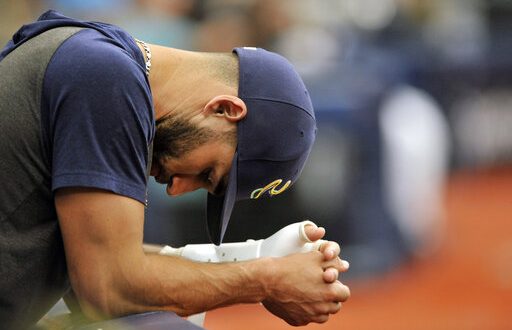 What a difference a week makes.

This time last week, the Tampa Bay Rays pulled off what many believed to be to biggest win of the season. Catcher Travis d’Arnaud hit three home runs, including the three-run homer in the top of ninth on two strikes and two outs. The Rays captured the 5-4 win in dramatic fashion. The highest of highs for the Rays was followed by the lowest of lows. Tampa Bay would lose the next three to the New York Yankees, losing the series and falling even further back in the standings. Then, the Rays dropped two out of three to the lowly Chicago White Sox at home.

Now, the struggling Rays welcome the division rival Boston Red Sox, as they try to keep their playoff chances from becoming playoff dreams.

Following the win on July 15, where they went toe-to-toe with one of the best lineups in baseball, the Rays have been left on the canvas. Since that win, the Rays have been outscored 32-13. Despite the struggles, the Rays have shown to come out swinging. In five of their last six games, the Rays got on the board by at least the second inning. The only outlier was Saturday’s 2-1 loss to the White Sox in the 11th inning. In that one, the Rays didn’t score until the seventh inning. Recently, the Rays  have experienced trouble maintaining these hot starts at the plate in their second and third times up.

What makes things even worse for the struggling Rays is the loss of outfielder Kevin Kiermaier. In Saturday’s loss to the White Sox, Kiermaier sprained his thumb sliding into first base headfirst. He left the game and has been placed on the injured list for 10-15 days.

#Rays place Kevin Kiermaier on the 10-day IL with a left thumb sprain. Surgery will not be required. Recall Guillermo Heredia.

The struggling Rays were able to stop the losing streak on Sunday behind another dominant performance from the defending Cy Young Award winner. Pitcher Blake Snell went six scoreless innings, striking out 10 and only allowing three hits. The 4-2 win was fueled by a Travis d’Arnaud’s first career grand slam in the second inning.

This rough patch for the Rays did serious damage to the team’s pennant dreams. Now, the Rays sit 9 games behind the Yankees for the top spot. Fortunately, they were able to get out of the double-digit games back category thanks to the win on Sunday coupled with the Yankees’ 8-4 loss to the Colorado Rockies.

The skid also propelled the Rays out of the top wild card spot in the American League. The Cleveland Indians now hold the top spot, with the Oakland Athletics only a game behind. The Rays are a game back of Oakland for the second wild card spot. Nipping at Tampa Bay’s heels are the Boston Red Sox. The Red Sox two games behind the Rays. A series win by Boston could make things even worse for the Rays.

Matchups between the Tampa Bay Rays and Boston Red Sox have been even. In the early weeks of the season, the Red Sox picked up a three-game sweep over the Rays. Then, the Rays responded with four straight wins over the Red Sox a few weeks later. The two teams would trade wins in the last two meetings. Tampa Bay holds a slight 5-4 season series advantage over their division rivals. Following this week’s three game series at Tropicana Field, the two will have nine more games against one another. These will be critical games for both squads as they fight for playoff positioning.

The struggling Rays return to the diamond tonight as they host the Boston Red Sox. Pitcher Jalen Beeks gets the start for the Rays. The Red Sox will send pitcher Eduardo Rodriguez to the mound. Our coverage starts at 6:30 p.m.

Previous With the Trade Deadline Approaching, What Will The Rays Do?
Next The Stats Behind the MLB Hall of Fame 2019 Class