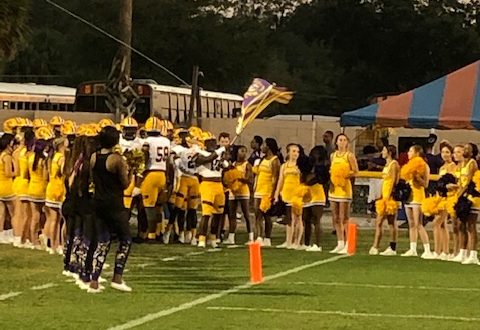 The Class 6A Columbia High Tigers improved to (5-0, 1-0) after defeating the Class 6A Gainesville Hurricanes (0-5, 0-1) Friday night in the district opener for both teams.

Following a bye week, the Tigers were looking to maintain their momentum heading into district play against the ‘Canes.

In the last couple of games, Columbia’s run game has struggled to get going. It’s something head coach Brian Allen has stressed. On Friday night, the ground game finally showed up.

Tigers’ senior RB Kylen Callum had arguably one of his best games of the young season. His three touchdowns were key for Columbia, including the first two of the game.

“I think our offensive line really locked in tonight,” Allen said. “They were able to open up some holes.”

Allen stressed the importance of a strong running attack for his team, saying, “It’s big for us moving forward, we can’t be one-dimensional.”

Dual-threat quarterback Jordan Smith also had a big impact on the ground for his Tigers. He scored twice with his legs in the second half, including a front-flip into the end zone on a 12-yard keeper in the 4th quarter.

While Columbia has struggled to find consistency in the running game, Gainesville has had issues getting results at the quarterback position.

The Gainesville offense had some success with Williams in the first half, as he scored one rushing touchdown as well as throwing a 56-yard touchdown pass to junior WR Alex Brown.

After some life on offense in the first half, Williams was under much duress from Columbia’s talented front in the second half as Gainesville failed to score again.

The defense has been the storyline for Columbia through its 5-0 start to the season. Despite playing numerous high-quality non-conference opponents, Columbia’s defense has allowed no more than 19 points in each of their first five wins.

This continued Friday night, as the Tigers didn’t allow the Hurricanes to establish any type of offensive rhythm.

Allen said that he focused on defensive mishaps when talking to his squad at halftime. The team followed suit, with a flat-out dominant performance on that side of the ball in the second half.

Next week, Gainesville will host cross-town rival Buchholz, in a non-district matchup. The Hurricanes look to get into the win column, as they obviously haven’t experienced the start that coach Miller envisioned.

The Tigers, on the other hand, hit the road again to face Class 1A powerhouse Madison County.

For Columbia, this will be the second of three straight road games. After Madison, they face district rival Lee before returning home to face 7A Atlantic-Delray. In reference to those next three, Allen says, “Those are all playoff-caliber teams, so we’re going to need to continue to improve.”