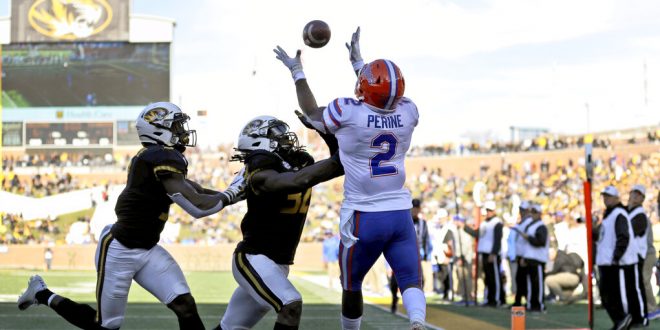 Coming out of high school lowly recruited, many would have let their dreams go and moved on with life. Lamical Perine did not think that way though.

After Auburn head coach, Gus Malzahn, told him he was too slow to be an SEC running back, it only fueled his fire more. Perine knew that he had what it took to make it, and nobody would tell him otherwise.

Four star-studded years for Perine all come to a close on Nov. 30. He knows that even through the good and bad times, there is no place he would have rather spent the last four years.

Even with one more regular-season game and the postseason, he already has racked up 520 rushing yards and four touchdowns this season.

Coming out of Prichard, Alabama, Perine was labeled a 3-star athlete and was the No. 493-ranked prospect in the country. In 2016, two running backs from Alabama were ranked above him. One who did not make it to college, and one, Malik Miller, who Malzahn believed was fast enough to make it in the SEC.

Perine had more rushing yards in the last four games of the 2018 season than Miller had total in his career at Auburn.

For a while, Dan Mullen and Mississippi State was his only Power 5 offer. That was until then Head Coach Jim McElwain and the Florida Gators came calling.

Late in the season, Perine received an offer from Nick Saben and Alabama. The offer came so last minute, that Perine felt disrespected by the offer and stuck with his commitment to Florida.

In 2016, he recorded 421 yards and 1 touchdown on the season and finished second on the team. He was one of eight FBS true freshman to post multiple 100-yard games against a Power Five opponent.

Things continued to look up in his sophomore season. He led the team for the 2017 season with 562 rushing yards and eight touchdowns.

However, things took a turn for the worst when head coach Jim McElwain resigned. Perine seriously considered leaving Florida that offseason after losing all of his coaches.

He stuck it out though, and Florida hired none other than Dan Mullen, who at one time gave him his only power 5 offer with Mississippi State.

In his first season under coach Mullen, Perine excelled. He not only led the team but had his best season yet with 826 rushing yards and 7 touchdowns, while sharing his time with then-senior Jordan Scarlett.

Following his stand out year, many thought that Perine would declare for the draft. However, he stuck by Florida again and stayed for his senior season.