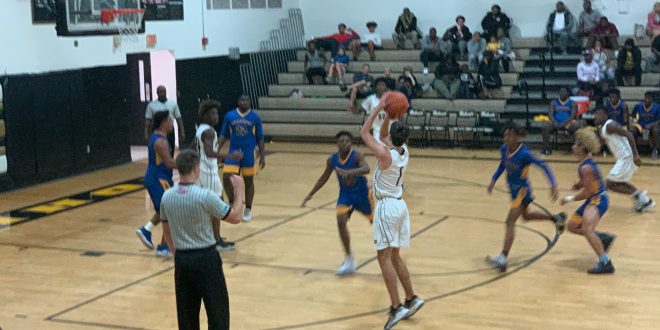 It had been exactly a month since the Buchholz High School Bobcats last won a game. Coming off a 10-game losing streak, almost no one expected the Bobcats to gain their first win since December 27 against Newberry Monday night. Except for Buchholz. Sitting at 3-16, the Bobcats had every reason to give up on their season. With the playoffs out of the picture, a win seemed almost seamless at this point in the season. That is until, well, they won.

The Buccholz Boys Basketball team won their first game of 2020 Monday night. By triumphing over rival Newberry 73-64, the Bobcats ended their ten-game losing streak with a much-needed victory. After going down early and being down 31-23 at the half, the Bobcats clawed their way back into the game. And after a nail-biting 4th quarter, the heart Coach Robert Horodyski’s team played with prevailed.

After a crushing defeat on their homecourt to Eastside Friday evening, Newberry needed a win Monday against Buchholz. When playing to win, there is just a different intensity from Patrick Green’s squad. That was evident early Monday for Newberry.  Star Senior Jaylen Zullo played quite possibly his best half of the season. Zullo could not miss, going 2-2 beyond the arc and dropping 17 points in the first half.

Senior Aryton DeCastro came out scorching for the Bobcats, scoring the team’s first nine points. However, he seemed to be the only one getting along with the basket, as the rest of Buchholz had trouble pounding the rock in the first half. Zullo could not miss, and Buccholz could not score. Thus, a feeling the Bobcats are used to crept upon them again, the despair of loss.

A Marathon, Not a Sprint

Coming out of half time, the Bobcats knew they had to change something up. As for Newberry, they had to put on the gas. Yet, Newberry seemed to put on cruise control. Buchholz came out of the locker room on a 13-2 run, fueled by guard TJ Jackson. Jackson had two points at halftime, but that stat was long forgotten after his second-half heroics. Still, Newberry found a way to combat Jackson’s performance. Newberry guard Steven Nelson had a relatively quiet game until this point as well. However, Nelson came out of a timeout after Buchholz’s 13-2 run with a Mamba mentality, evening the match at 41 going into the 4th quarter.

As if the 4th quarter was a reflection of the entire game, Newberry came out hot. Zullo drilled his third three of the game, and the Panthers got their swag back. But so did Jackson and DeCastro, as Buccholz scored the final 10 points of the game en route to a 73-64 victory. Jackson and DeCastro finished the game with 20 points apiece, carrying their team to their first win in 31 days.

For Buchholz, this is nothing but an uplifting win for outgoing seniors, such as Aryton DeCastro. At 4-16, Buccholz’s playoff hopes are a distant memory. However, this win does miracles morale wise and shows these players that their hard work pays off. This victory also can be a great building block for Coach Horodyski heading into next season, showing the heart and determination needed to win.

For Newberry, to say this was a must-win is an understatement. The Panthers now must win all of their final five games to reach a .500 record. Newberry has immense potential, and was shorthanded tonight, playing without their second-leading scorer Makhi Bostic and starting point guard Tayveon Tate. Yet, it looks like that potential won’t have a chance to be showcased. Alternatively, they will be using this season as a building block for their relatively young team, with a bright future.

Buchholz returns to the hardwood Friday night against crosstown rival Gainesville High School looking for their fifth win. Newberry has no time to wallow in their losses, as they take the road Tuesday to take on Cedar Key. It is a win-now mode for Newberry, as Patrick Green and company look to salvage this season. As for Buchholz, they deserve to celebrate a long-overdue win.