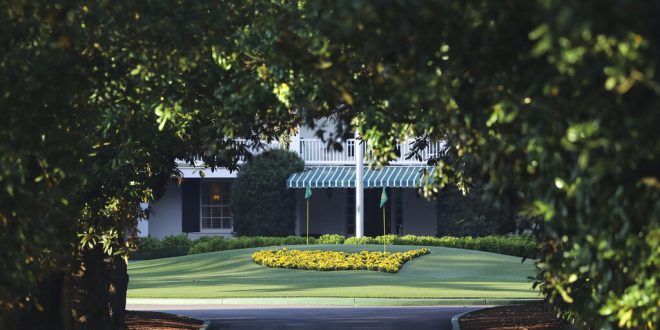 Augusta National Golf Club is shown on what would've been the first practice round for the Masters, Monday, April 6, 2020, in Augusta, Ga. They are cities defined by their signature sporting events. When you hear Augusta, you instantly think of the Masters. When Omaha comes up, it’s often in the same breath with the College World Series. For these cities and others, the shutdown caused by the coronavirus pandemic is an especially tough blow.(Curtis Compton/Atlanta Journal-Constitution via AP)

The 2020 Masters, like many of this year’s sporting events, has been rescheduled. The Augusta National Golf Club now plans to hold the event in November after initially postponing it due to the coronavirus pandemic.

The Masters was originally scheduled to take place this week, but leaders canceled the event in mid-March as COVID-19 spread across the U.S.

Golfing events were some of the last to be postponed in March. Initially, the PGA Tour tried to continue with its schedule of events without fans, but eventually it was forced to cancel.

“I don’t see a reason to play major championships if you don’t have the fans there,” said former Gator Andy North. “It just doesn’t make any sense to me. I happened to play in an event years ago where the temperatures were so hot that they didn’t allow fans out there and it was really weird. So much about major championships is the vibe of the event.”

Many people are wondering how the postponement will affect the 2021 Masters.

“That’s one thing we don’t know for a fact. It might. I think at Augusta National they’ll figure out a way to handle that, whether it be with reduced play or whatever.  Nobody does it better than they do,” said North.

Andy North played for the Florida men’s golf team from 1969 to 1972. He was a three-time first-team All-Southeastern Conference (SEC) selection. He was also an All-American in 1970, 1971 and 1972. North was inducted into the University of Florida Athletic Hall of Fake as a Gator Great.

Although, North is best known for his success in his professional career. The Wisconsin native has won the U.S. Open twice and the Ryder cup once. In 1993, North joined ESPN as an on-course reporter. He was promoted to the lead on-course reporter for ESPN and ABC Sports in 2004.

The 2020 Masters is scheduled to start the week of Nov. 9. The U.S. Open and PGA tour were also canceled. Organizers of these events also plan to reschedule them for a later date.