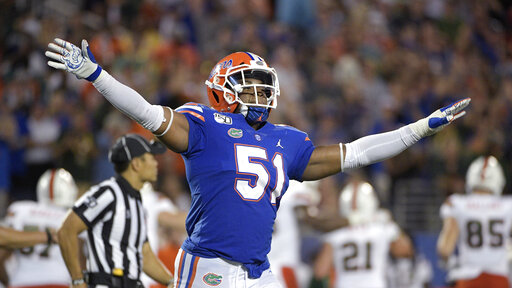 Ventrell Miller Takes a Look at This Weekend and This Season

University of Florida football returns this Saturday as the Gators travel to Oxford, Mississippi. NCAA football has been underway now for three weeks. The Gators take to the field for the first time this year against Ole Miss. Ventrell Miller spoke yesterday about the game and the season as a whole.

Ventrell Miller is a redshirt junior from Lakeland, Florida. He appeared in 12 games last season, 11 of which he started. As a linebacker, Miller ended the season with the second-most tackles on the team, 27 solo and 28 assisted. He also ended the 2019 season with three sacks, two of which came from the preseason game against Miami. In the Orange Bowl game against Virginia in December, Miller hit a career high of eight tackles in one game, three solo and five assisted.

Miller is well-known for his performance last season against Miami. To Miller, this game was a big turning point in his college career.

During one play in particular, Miller had a third down stop that prevented Miami from entering the redzone and instead forcing them to go for a field goal. Miller says that looking back, he knew that it was the opportunity for him to show his abilities to his coaches and teammates.

With speculation on whether or not they would be able to play over, Ventrell Miller says that he and the team are excited to play now that it is game week.

Like all week ones though, there is a lot of pressure to set the team up for the rest of the season. Miller continues on to talk about how, while yes it is exciting to get to play, it is time to be focused for the game.

Ole Miss welcomed a new head coach this year, Lane Kiffin, to the team. Kiffin still has yet to announce who he plans to start at quarterback though. Currently, the Rebels have two main options. Matt Corral, who started last year until an injury in their game against California. Then, John Rhys Plumlee, who took over after Corral’s injury. Corral is known as being the better of the two when it comes to passing, so much so, that most of the switches between the players seen last year came from a need to throw. Plumlee has proven, however, to be a better runner with over a thousand rushing yards, but only a 52.7% completion rate for passing.

Kiffin’s silence about which player will be starting has forced Florida to prepare heavily for both rushing and passing. Miller says that Florida’s defense will be able to measure up to either quarterback thrown at them as long as they execute.

Ole Miss also has a large portion of their rushing offense, that was number one in the SEC last year, returning. Once again though, Miller says that he believes that the Gators can out perform them if they play to the “Gator Standard.”

The Gators’ opening game is once again on the road, after playing Miami away in Orlando last year. Miller says that playing this first game away will be a testament to how the Gators handle adversity.

Even though football season has now begun, teams and staff have to continue to prepare and take precautions in order to remain healthy. COVID-19 has led to new safety measures in stadiums that has limited the number of fans present at games. Health measures have also been put in place that have changed the looks of practice and how players mentally approach the game. All of these changes are expected to alter the way that athletes look at their own roles on their teams.

Rylee is a second year Journalism major with a specialization in Sports and Media at the University of Florida College of Journalism and Communications.
Previous Ndamukong Suh looking to secure the ring
Next Nuggets avoid three game deficit, beat Lakers 114-106 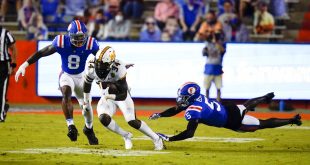 It’s safe to say the Gator defense struggled mightily in 2020. For the first time …