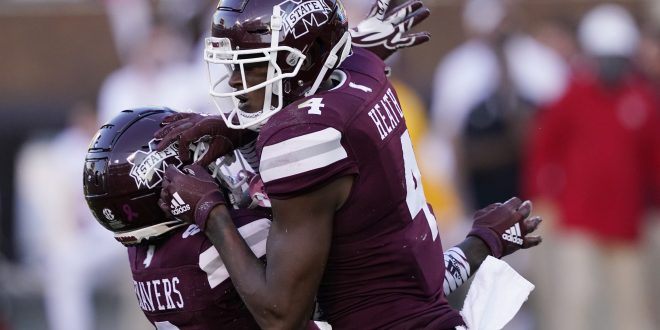 This week, SEC football presents a “David and Goliath” scenario as Alabama hosts Mississippi State Saturday at 7 P.M. Alabama maintains perhaps the best offense in the SEC. Therefore, Mississippi State will rely on its defense this weekend to grab a fighting chance.

The Mississippi State Bulldogs will be entering the Halloween showdown against Alabama with eight fewer players than they had last week. Garrett Shrader, Jalen Mayden, Nick Pendley, and Kareem Walker entered the transfer portal early in the week. Then, Tyrell Shavers, Tre Lawson, and Jamari Stewart followed suit on Wednesday. Lastly, running back Kylin Hill has officially decided to opt-out of the remainder of the season. Head coach Mike Leach explained that the coaching staff is focusing on the players still in the program.

“You just adjust as it comes. Those guys are into a new chapter in their life and so are we. We wish them the best but we are really only concerned with the guys that are in the program that we’re coaching,” said Leach.

The Bulldogs are coming off of a bye week where they continued practices and focused on fundamentals. Coach Leach said he is not too worried about a spike in COVID-19 cases.

“We were fairly active in the course of the bye-week so if someone went somewhere it wasn’t for very long. We had meetings and practices most of the days. We’re testing all the time too,” said Leach.

With the continuous roster changes on both sides of the ball, Mississippi State will have their work cut out for them this weekend against a more consistent Alabama.

Prepping for the Unknown

Through the Bulldog’s adjustments, roster changes, and top defense, Alabama has been prepping for anything that could be thrown their way. According to coach Nick Saban, Saturday’s game comes with uncertainties.

“Mississippi State has a lot of different looks we will have to prepare for offensively because of the way they play defense. They play very well defensively and one of the top teams of the country. Also, their offense is different than what we see on a regular basis so there is preparation in that also. This is still a challenging week for us,” Saban explained.

Meanwhile, Saban also has to focus on keeping his players healthy and on the field.

“Disruptions are just a way of the world. This season how you manage these disruption sis critical and keeping players focused. We have relied on education in terms of how to manage a personal bubble and how to best stay safe,” said Saban.

Parker Welch is a Junior at the University of Florida majoring in Sports Media at the College of Journalism & Communications.
@parkerrwelch
Previous Auburn, LSU Meet in a Highly Anticipated Halloween Showdown
Next Arizona Wildcats men’s basketball team served with nine NCAA rule violations