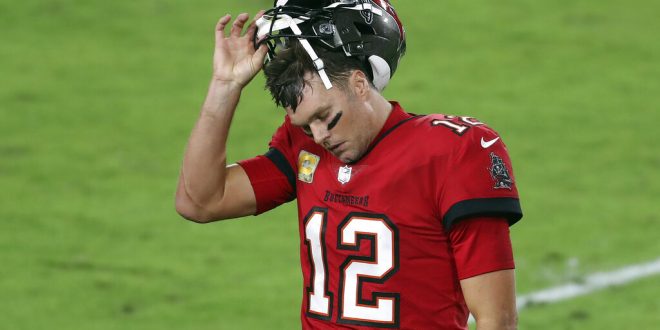 Tampa Bay Buccaneers quarterback Tom Brady (12) reacts as he leaves the field after throwing an interception against the New Orleans Saints during the second half of an NFL football game Sunday, Nov. 8, 2020, in Tampa, Fla. (AP Photo/Mark LoMoglio)

How many times will Tampa Bay Buccaneers head coach Bruce Arians publicly criticize Tom Brady before it becomes a pattern?

The world may never know.

What pundits do contend, however, is that a head coach’s public criticism of his or her players has no place in the world of sports.

ICYMI: Bucs lost 38-3 in Sunday’s game against the Saints

The Tampa Bay Buccaneers lost for the first time at home in 202o against the New Orleans Saints, and yesterday, Bruce Arians explained the loss in a way that may have included a few jabs at his quarterback Tom Brady per Shannon Sharpe.

In the eyes of the Buccaneers coach, Brady was to blame for a large part of the team’s loss after throwing for 209 yards and three interceptions.

Never mind the inarguably bad play-calling, lack of gap control and uninspired defensive efforts on the Bucs’ end. Or the fact that the Saints simply outplayed, out-coached and out-planned their opponents.

To Arians, Brady’s insipid effort on the field — and little else — warranted public scrutiny.

This week’s stream of backhanded comments were slightly understated, unlike the ones Arians has made in the past.

On Monday, during a video conference with reporters, Arians made it clear that it was Brady  — not his receivers or anyone else — who was responsible for the two interceptions he threw.

According to NBC Sports’ Mike Florio, when asked by reporters on Monday whether the game included situations of Brady and the receivers not reading the coverages similarly, Arians said this: “The interception to [Antonio Brown] — that was just a poor throw.”

The media later asked Arians why Pro Bowl wide receiver Mike Evans has not been more involved in the passing attack for Tampa Bay’s offense.

Unsurprisingly, his response took form in a yet subtle jab at Brady.

“Mike was open a bunch in that ballgame,” Arians said. “He didn’t get targeted — that was all. Mike was open.”

Brady’s Used To It

For the veteran QB, a six-time Super Bowl champion in his 20th NFL season, this is new but not a surprise.

Though this might be the case, Arians’ stream of “Brady shade” continues to draw criticism across the country. Brady has never been publicly scrutinized, so relentlessly, for struggling to meet expectations. And unfortunately, the end to such scrutiny from his no-nonsense coach is nowhere in sight.

For Brady, this means that that the Buccaneers’ improvement starts (and, perhaps, ends) with him.