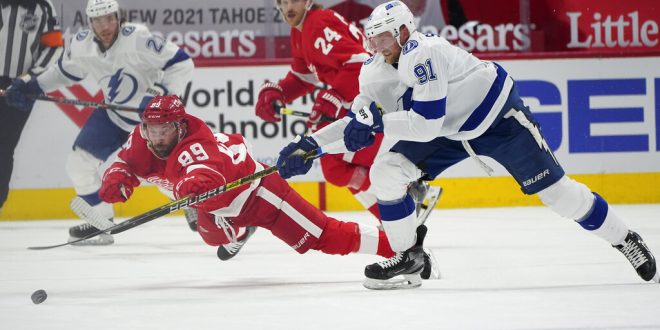 Tampa Bay seemed to bounce back every time Detroit took the lead in the first period. The Red Wings opened up scoring eight minutes and 31 seconds into the game. The Lightning answered with a shot from the left circle by Steven Stamkos. Detroit took the lead again shortly after with a goal from Dylan Larkin. Once again, Stamkos responded with a power play tally to tie the game at two. The Red Wings got away with another goal to secure the lead just 61 seconds later. Anthony Mantha’s shot was initially stopped by goalie Curtis McElhinney, but Jan Rutta crashed into the net and pushed the puck over the line. Tampa Bay challenged for goalie interference, but the goal was confirmed after review. At the end of the first period, the Lightning were down 3-2.

Tampa Bay was able to hold steady with Detroit in the first 15 minutes of play, but the Lightning came up empty in the second period. Less than five minutes into the period, Detroit had already extended its lead to three. The Red Wings were able to score both goals by optimizing on a pair of turnovers by the Lightning.

There seemed to be hope for Tampa Bay late in the third period. Brayden Point and Ondrej Palat scored a pair of quick goals to bring the Lightning within one. However, missed opportunities on the power play kept the Bolts from making a comeback. With 20 seconds remaining in the game, Vladislav Namestnikov scored on an empty net to solidify Detroit’s victory.

Despite the loss, Steven Stamkos said the Lightning played better than in some of their wins on the six-game road trip. The Bolts took nine of the 12 possible points during the last six games.

“Tonight, the score didn’t indicate where the game was,” Stamkos said.

Tampa Bay returns home to face the Nashville Predators in a two-game set Saturday at 7 p.m. and Monday at 4 p.m.