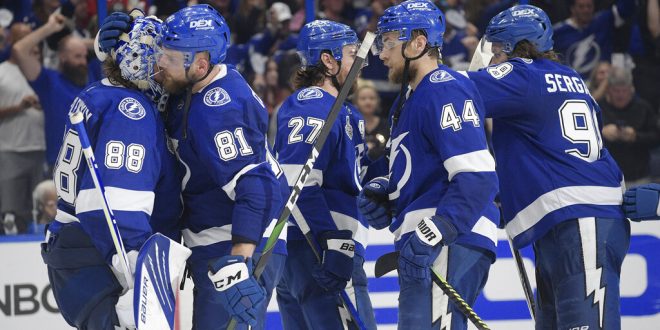 On Friday, the Tampa Bay Lightning look to get one step closer to their second-consecutive Stanley Cup title in Game 3. After hosting the first two games, the Lightning travel to Montreal, where they look to take a 3-0 series lead.

Leading the way for the Lightning in the 2021 postseason is Nikita Kucherov, who leads the NHL with 30 points during the playoffs. Along with Kucherov, center Brayden Point leads the league with 14 goals this postseason. It’s a historic postseason for Point, as he scored a goal in nine-straight Stanley Cup Playoff games, one short of tying Reggie Leach’s record of 10 set in 1976.

During the playoffs, the Lightning have had good success on the road with a 6-3 record. On home ice, Montreal holds a 5-3 record. As the lower seed in each of its series, Montreal has not had home-ice advantage for the entire playoffs, but has taken advantage of the opportunities at home. Canadiens center Eric Staal expressed how important the atmosphere at home is for Montreal:

With a win on Friday, Tampa Bay is one win away from clinching their second consecutive Stanley Cup title. If Montreal wins, the gap shortens for the Canadiens, who have a history of comebacks this postseason.

The Lightning put on a show for the home crowd at Amalie Arena in Game 1, which was a 5-1 victory against the Canadiens. Leading the way was Kucherov, who led all players with two goals and added an assist to lead the Bolts to a win.

One and done for Kuch ☑️ pic.twitter.com/LPZAyWZ9jQ

Adding to Kucherov, Stephen Stamkos, Yanni Gourde and Erik Cernak each added one goal. Furthermore, Point assisted on three of the Lightning’s goals.

In Game 2, the Bolts continued to take advantage of home-ice advantage with a 3-1 victory. The win put them up 2-0 on the series. Goalie Andrei Vasilevskiy lead Tampa Bay in a hard-fought victory with his 42 saves, a playoff career-high. Head coach Jon Cooper expressed how impressed he was by Vasilevskiy’s performance:

On the offensive side, Anthony Cirelli starting the scoring off with a goal in the beginning of the second period. After the Canadians tied it up, Blake Coleman’s impressive diving goal with 0.3 seconds left in the second period put the Lightning up 2-1.

After taking the lead, Ondrej Palat’s goal in the third period sealed the win for the Lightning, who took a commanding 2-0 series lead before heading to Montreal for Game 3.

On Monday, Montreal hosts Game 4, which could be an elimination game should the Lightning win on Friday. If necessary, Tampa Bay hosts Game 5 on July 7. A potential Game 6 will be played on July 9 in Montreal. Lastly, the series will move back to Tampa Bay for Game 7 if necessary.