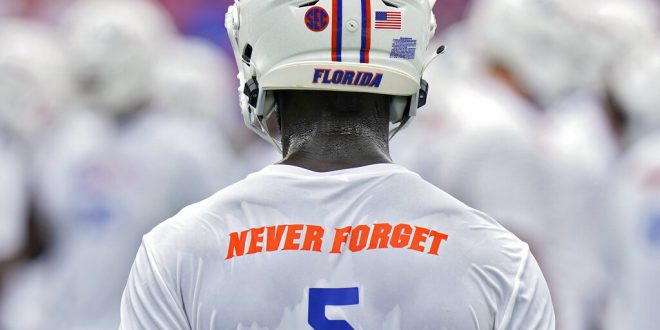 Heading into Saturday’s matchup, Gators defensive back Kaiir Elam recapped the defense’s performance against No. 1 Alabama (3-0) last weekend and discussed this weekend’s matchup against Tennessee (2-1).

Following Florida’s (2-1) 31-29 loss to the top-ranked Crimson Tide, Elam tweeted that the loss was unacceptable and that he would improve as a team leader.

Losing NOT acceptable, especially in the Swamp! I have to step it up as a leader but I still love this team over Anybody Every Saturday. #Win

Adding to his tweet, he said in a press conference on Sept. 20 that the Gators should not have sympathy.

“I feel like we shouldn’t have any sympathy just because we lost by fewer points,” Elam said. “I just really wanted to make a statement to Gator nation, but also to my team. A loss is unacceptable. I didn’t feel good about us being proud of that. We just need to focus on winning. That’s all I want to do. I just want to win and help my team win.”

In the loss, Elam and the Gator defense gave up an astounding 21 points in the first quarter, but then held the Crimson Tide to only 10 points for the rest of the game. The start to the Gators’ impressive finish was in the second quarter, where the defense only gave up three total yards. Talking about the performance and how to continue playing at a high level, Elam said that it starts with practice.

Adding to this, Elam said that the Gator defense must consistently execute defensive coordinator Todd Grantham’s play calls if they want to be a dominate unit.

Although a loss, Elam himself had a terrific performance against the Crimson Tide. He finished the game with three forced incompletions, which was the most in the SEC over the weekend. Normally avoided by opponents, Alabama quarterback Bryce Young was not afraid to target Elam’s side of the field, which Elam said made him mad.

“I got angry every time they tried to throw at me,” Elam said. “I just feel like it’s disrespectful every time a team throws at me.”

Moving into the upcoming game against Tennessee, Elam said that the team must move on from the loss and focus on the next game.

Previewing Tennessee, he explained that Tennessee runs a very up-tempo offense that is not afraid to take shots down the field.

The No. 11 Gators and Kaiir Elam host the Volunteers on Saturday night at 7 p.m. on ESPN.