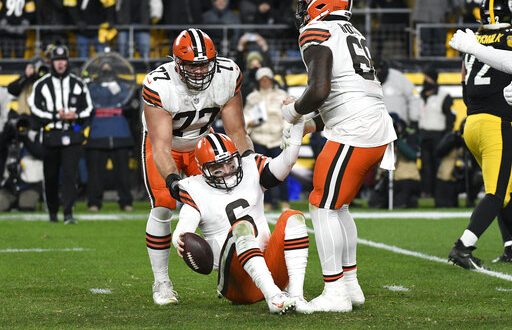 With the Cleveland Browns entering the final week of the season, multiple questions have risen on the future of quarterback Baker Mayfield. Coming off his best season in 2020, it looked as though the Browns had their franchise quarterback for the next five to 10 years. But after a torn-labrum in his non-throwing shoulder, along with left foot soreness and a right knee contusion, Mayfield’s injury-plagued season may cause an exit out of Cleveland.

Mayfield and the Browns began the season with an exciting matchup against the Chiefs. Although they were narrowly defeated, Mayfield showed signs of a consistent quarterback performance. In week two, Mayfield started the game completing nine straight passes. But an interception forced Mayfield to try and stop the opposing defender. He then lead with his left shoulder in for the tackle, tearing his labrum.

In his first two games, Mayfield completed 82% of his passes. But after the injury, Mayfield’s completion rate decreased 59.5%, which is the fourth worst in the league. These struggles appeared in his stats. Mayfield was sacked nine times this past week against the Steelers, along with throwing two interceptions. Mayfield also threw five more interceptions than he had last year, and has only tossed 17 touchdown passes this season.

After the 2020 season, there was a possibility the Browns would lock up the quarterback for the near future with a contract extension. However, the team did not offer Mayfield the contract extension; and instead, exercised his fifth year option. Exercising the option forces Cleveland to pay $18 million to the quarterback in 2022. Though, the Browns are not stuck with Mayfield, as the team is able to trade Mayfield or release him without penalty.

Yet, the Browns don’t have the draft capital to go after a big-name quarterback, unless they’re willing to trade their young star players in a trade package. Instead, Cleveland could look to bring in a veteran quarterback on a one-year deal. This would be an implication that Mayfield’s time in Cleveland is over.