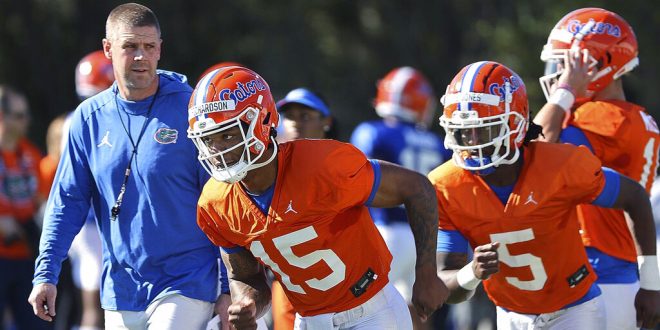 Excitement is high in Gainesville as spring practice is officially underway for the Florida football team. Associate head coach of offense and running backs Jabbar Juluke talks how the team is improving throughout spring ball.

After a disappointing 2021 season that saw the Gators finish with a 6-7 overall record, there is plenty of work to be done in 2022. And with first-year head coach Billy Napier at the helm, he plans to make changes to the teams’ physicality as well as mentality. Beginning with tough workouts in the winter, the Gators are getting a push under Napier’s leadership.

Juluke followed Napier to Gainesville after spending the past four years with the Louisiana Ragin’ Cajuns. Prior to that, the Gators lost top rushers in Dameon Pierce and Malik Davis. On the other hand, Juluke is inheriting a solid mix of young talent as well as returners in Nay’Quan Wright. Now, he says the team is practicing with even more structure.

Juluke spoke on the goals of the program throughout spring practices and how each player will need to earn their spot on the field.

Meanwhile, he says the team is taking full advantage of every opportunity as competition remains high amongst players.

And while the program is looking to build its depth and keep its options open, Juluke says he wants players building relationships as well.

Looking ahead to the spring game

The Florida Gators football team will play its first spring game in three years due to the start of the COVID-19 pandemic in 2020. The Orange and Blue game will take place on Thursday, April 14 in the Swamp with a 7:30 p.m. kickoff.

The annual spring game will stream live on SEC Network+. Fans will get their first look at the Florida football program under its new leadership.

Tori Edwards is a fourth-year Telecommunications student specializing in News with an outside concentration in Sport Management. Tori works as an author and reporter for WRUF.com and is the voice of trendings on Monday afternoons on ESPN 98.1 FM - 850 AM WRUF. You can reach Tori at victoriaedwards@ufl.edu.
@ToriEdwardsNews
Previous Belmont v. Tennessee Preview
Next Tennessee Lady Vols Hold Off Belmont in Final Seconds