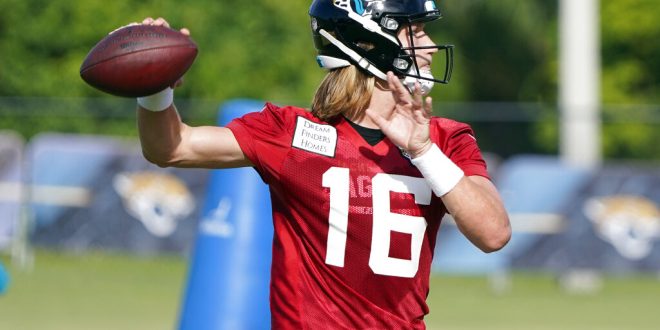 Jaguars Begin Camp as the Season Draws Near

On Monday, the Doug Pederson era began in Jacksonville as the Jaguars took the field for their opening day of training camp. With a lot of new faces around the organization, Jacksonville gets ready to ramp up their training. They will look to bounce back this season after a 3-14 overall record in 2021. The Jaguars finished last in the AFC South last season.

Jaguars quarterback Trevor Lawrence begins camp getting ready to start his sophomore season in the NFL. The Clemson product threw for 3,641 yards last season along with 12 touchdowns and 17 interceptions. Lawrence tied Matthew Stafford of the Rams for the most interceptions. Without having to deal with the hype from the NFL draft, Lawrence has more time to prepare for the season.

A “sky is the limit mentality” is expected out of Lawrence this season as Doug Pederson talks about his expectations.

Lawrence talks about his excitement for camp and the opportunity to grow and get better with his team.

“We have a lot to prove,” said Lawrence when talking about motivation for the season. Coming off the worst record in the NFL last season, they certainly do. Over recent years the injury-plagued jaguars have had issues not just on the field, but in the front office as well. They look to improve given a fresh start, with training camp as step one.

The start of camp can be rough, but Pederson liked what he saw from his roster on day one.

Jacksonville will be in the full swing of camp soon, but day one set the tone for Pederson’s guys. Throughout the week the jaguars will continue to work up to practicing in full pads.

Running back James Robinson practiced individually on day one. After a ruptured Achilles tendon suffered in week 14, he was not expected to be ready for week one. This is a good sign as the Jaguars can hope to have him ready to go by the start of the season.

Jacksonville will look to improve this season starting week one in Washington against the Commanders. Until then, Coach Pederson will continue to build his brand in camp on the way to turning his guys into contenders.