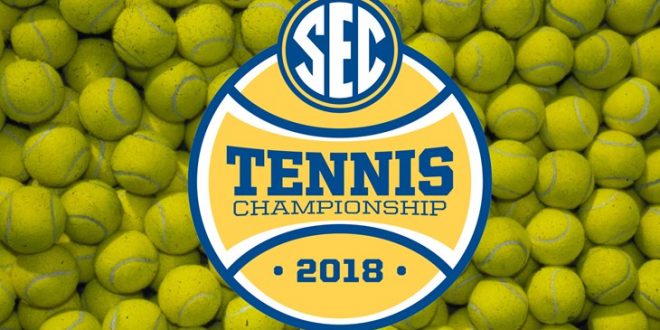 The 2018 SEC Men’s Tennis Championships began yesterday with Alabama defeating Auburn 4-0.  Today, the matches continue and the winners will advance to the semi-finals.

Vanderbilt: The Commodores have three players listed in the ITA singles rankings. One important Vanderbilt player is no. 25 ranked Cameron Klinger who has a 13-8 record this season.

LSU: Stewart Block and Shane Monroe have 11 wins in double play, which is the team’s highest.

Vanderbilt won the match 4-0.  They will not play #3 Florida Friday

Ole Miss: The Rebels lead the series against South Carolina 25-10.  Ole Miss is looking to make its 18th appearance in the SEC semifinal round.

#12 Alabama vs. #5 Kentucky plays today at 4.  After defeating Auburn, Alabama is ready to take on its next SEC opponent.

Alabama: Alabama defeated Auburn to make it to today’s match.  The Crimson Tide lost 0-4 to Kentucky in the regular season, but the team’s energy is keeping them going during the first game of the tournament.

Kentucky: The Bobcats are ranked no. 25 and a double’s pair, Ryo Matsumura and Will Bushamuka, is ranked no. 18.

The winner of this match will move on to play #4 Tennessee.

#8 Georgia vs. #9 Arkansas face off in the first round of the SEC Tournament.  In their last matchup, Arkansas beat Georgia 4-3

Georgia: Georgia heads into the SEC tournament as defending champions.  The Bulldogs finished the regular season with an undefeated match against Vanderbilt and Kentucky.

Arkansas: The Razorbacks won the last four of their six matches in the regular season.  Arkansas only has one senior on the team- Jose Salazar.  His record is 17-6 and won his last eight of nine matches.

The winner of this match will face #1 Texas A & M Friday.

The Rest of the Week

Quarterfinals begin on Friday, semifinals will be played on Saturday and the final match is set for Sunday.

Fans can watch and keep up with the tournament on SEC.com.

Nicolette is a senior at the University of Florida who has participated and enjoys reporting on all things related to sports.
Previous NBA Playoffs: Game 5 Highs and Lows
Next Condoleezza Rice Committee On NCAA