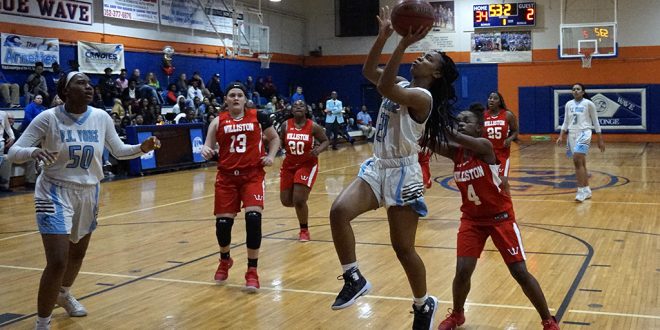 P.K. Yonge was able to capitalize on light defense under the basket for easy layups. (Photo/Steven Walker)

On paper, the girls’ basketball game between the Williston Red Devils and P.K. Yonge Blue Wave had the potential to be a good matchup. Williston entered the game with a 13-6 record and a point guard, Lauryn Jackson, who averaged 24 points per game and P.K. Yonge came in with a 13-game win streak.

Right from the tip-off, though, the game was anything but close. This came down to a multitude of reasons, but there was one that stood above the rest; Williston Head Coach Tanner Thomas sat his star player Lauryn Jackson and went with a new lineup altogether.

Before the game, Coach Thomas mentioned how first quarter struggles tripped them up in their 54-79 loss to the Blue Wave earlier in the season. This matchup was no different, as P.K. Yonge capitalized off of early turnovers and dominated the boards to cruise to an early 32-0 lead.

The Blue Wave’s physicality and utilization of the full court press caught Williston completely off guard, and before they could blink they faced a 30+ point deficit. Center Mya Mcgraw of P.K. Yonge proved to be especially difficult to manage, as her height advantage allowed her to dominate rebounds and make layups with ease.

The full court press has kept the Red Devils in check on offense, giving PK Yonge a 74-26 lead through three quarters @ESPNGainesville pic.twitter.com/4FIIhNXLfK

It took Williston nearly 14 minutes to reach double digits and after one half, the Red Devils trailed 14-56. Lauryn Jackson still had yet to see any playing time.

So why would Coach Thomas refuse to play his star playmaker in arguably their toughest game of the season? Thomas said before the game that due to a disappointing week of practice, he chose to sit some of the playmakers that were accustomed to carrying the team.

Without any district games remaining between his team and the playoffs, Thomas decided to use this game to teach his players to put in more effort. Halfway through the 3rd quarter, Jackson finally subbed in and immediately scored on a dazzling layup. Turnovers and sloppy defense still plagued the team, but Jackson’s short performance showed how Williston made it to 13 wins. However, this came far too late for Williston, as the game ended as a humbling 31-81 loss.

P.K. Yonge wraps up a dominant performance on their home court, beating the Williston Red Devils, 81-31. This is their 13th straight victory and extends their record to 25-1 @ESPNGainesville

Coach Thomas was able to offer some insight on what the loss meant for Williston moving forward.

I'm a third-year student at the University of Florida passionate about storytelling and sportswriting. My goal is to work in communications for a professional sports team after I graduate.
Previous Rams Readying for Super Bowl LIII
Next A Tale of Two Halves, Bradford Boys Blast Keystone Heights In Boy’s Basketball