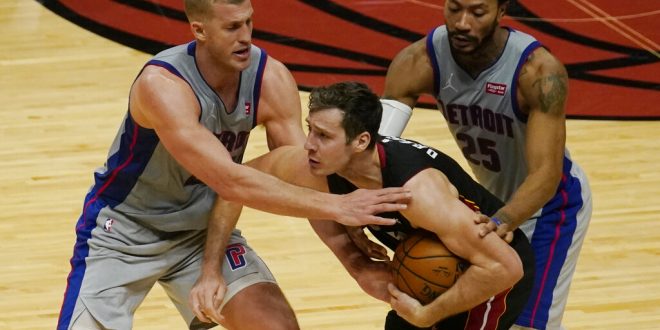 Florida NBA teams took the courts Monday night for a couple of weekday matchups. The Orlando Magic (6-8) dropped their sixth straight game, falling to the New York Knicks 91-84 on the road. While the Miami Heat (5-7) took a needed 113-107 victory over the Detroit Pistons.

The Miami Heat overcame a 19 point deficit to snap a three-game losing streak in their victory over the Pistons. Miami’s Bam Adebayo led all scorers with 28 points. In addition, the center added 11 rebounds and five assists on the night.

Detroit got things going early in Monday’s game. The Pistons jumped out to a strong 36-24 lead by the end of the first quarter. Detroit’s Jerami Grant led the Pistons with 27 points and six assists. Wayne Ellington tacked on another 24 points, shooting seven of eleven from the 3-point line.

Midway through the second quarter, the Heat managed to slash the Piston’s lead. A jumper from Goran Dragic gave the Heat their first lead of the night 53-51. Dragic put up 22 points and three assists against the Pistons.

However, Detroit made a comeback entering the half ahead 61-55. The second half leaned in favor of Miami. The Heat regained control of the game in the third quarter, holding the lead the rest of the game.

After a 4-0 start to the season, the Orlando Magic have struggled in their last few outings.

In their most recent loss, Orlando jumped out to an early lead in the first half against the Knicks. Entering the half, the Magic led 47-38.

Orlando’s Nikola Vucevic led the Magic with 24 points and 14 rebounds in Monday’s loss. In addition, Aaron Gordon came up just shy of a triple-triple adding 18 points, 17 rebounds and nine assists. Furthermore, Terrence Ross came off the bench to add 19 points for the Magic.

The Magic held the lead until just under five minutes in the fourth quarter. However, the Knicks Julius Randle and RJ Barrett would push New York over the Magic in the end. Randle’s 21 points and 17 rebounds in combination with Barrett’s 22 points and 10 rebounds would give the Knicks the victory.

Back at it Wednesday. pic.twitter.com/hNNxTm5PVh

The Heat return to the court Wednesday night against the Toronto Raptors. Tip is set for 7:30 p.m.

Orlando looks to bounce back on in their Wednesday night road match with the Minnesota Timberwolves. Tip-off is set for 8 p.m.