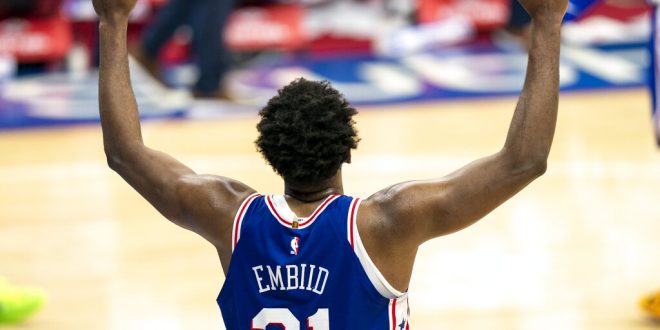 The City of Brotherly Love only yielded heartbreak for the Miami Heat. With both teams missing several key players, the Philadelphia 76ers held on in overtime to survive against the defending Eastern Conference Champions.

Pregame, the Heat-Sixers matchup looked dissimilar to the closely contested games seen in recent years. The Miami Heat played without three of their biggest stars: Jimmy Butler, Bam Adebayo and Goran Dragić. Ben Simmons and Joel Embiid missed games over the weekend due to slight injuries, but both were available on Tuesday night.

Led by Joel Embiid’s 45 points and 16 boards, the former Kansas Jayhawk led the game in scoring and rebounding. However, unlikely heroes propelled the Sixers. Danny Green made a career-high nine three-pointers for 29 points, and it was the little-known Dakota Mathias who iced the game. With Philly trailing 132-131 with 29 seconds left in overtime, Mathias drained his only bucket of the game to put the Sixers up 134-132.

The rookie is on a two-way contract with the 76ers’ G-League team. Philadelphia called him up as a result of several players being out due to COVID-19 Health and Safety Protocols.

Still, the Miami Heat came into the game undermanned and frankly outmatched. They forced the Sixers to survive.

All five of the Heat’s starters reached double figures, including 34 points from Tyler Herro, 26 from Duncan Robinson and 24 from Gabe Vincent. With seven players on the health and safety list, it is fair to say this Heat team gave it their all, according to head coach Erik Spoelstra.

“It wasn’t a matter of lack of want or lack of effort,” Spoelstra said postgame. “It’s just a matter of getting over this hurdle of really finishing plays.”

Survive and move on

This wasn’t a postseason game, so there is not really anywhere to advance to for either team presently. However, the game certainly felt like a game seven. With these two teams certainly in the running to be contenders in the Eastern Conference, this game came at a crucial time. Philadelphia’s win meant an end to their three-game losing skid, which saw them fall out of first in the conference. They are level with the Boston Celtics at the top of the East.

When the Miami Heat win, they lose the next game. Fortunately, when they lose, they win the next game. The Heat currently sit at 4-5 as a result of not being able to string together consecutive wins. Although normally overtime losses can dampen spirits in a locker room, this game has the potential to be a building point for the Heat. With those seven players out, the Miami Heat play young, inexperienced players.

“We’re trying to develop guys to learn how to win at the highest level, this year,” Spoelstra said.

This early-season experience with close games against strong opponents could easily benefit the Heat as the season progresses.

The Miami Heat will look to do what they do best, bounce back after a loss when these two teams meet again on Thursday.

The Philadelphia 76ers could go level with the Boston Celtics in wins on Thursday. However, the Celtics would have games in hand with their recent health and safety protocol violations.

Perhaps  Thursday’s game brings some love for the Heat, unlike Tuesday. Likewise, the Sixers will look to get back to their early season form with the return of their stars.

Originally from Seminole in the Tampa Bay area, Kyle is a contributor for ESPN Gainesville as well as local NPR and PBS affiliate WUFT. Kyle wants to get into sports with a lofty dream of being a sports broadcaster. He was raised playing soccer and baseball while watching hockey and football, so the knowledge about various sports is fairly extensive.
@KyleFanslerUF
Previous Perseverance: Tampa Bay Lightning Vice President and General Manager “knew there was potential here.”
Next Former Jaguars Head Coach Gus Bradley set to be Raiders’ New Defensive Coordinator