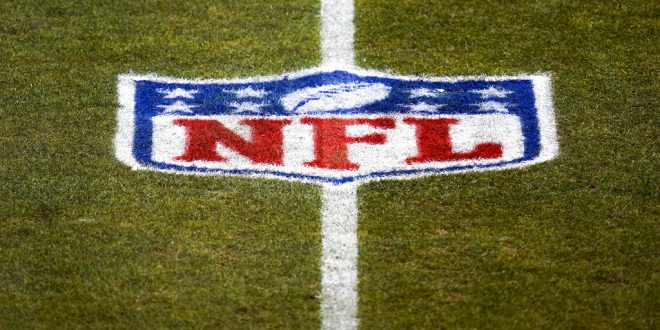 FILE - This Jan. 3, 2021, file photo, shows the NFL logo on the field before an NFL football game between the Denver Broncos and the Las Vegas Raiders in Denver. The NFL has informed teams they could potentially forfeit a game due to a COVID-19 outbreak among non-vaccinated players and players on both teams wouldn’t get paid that week. Commissioner Roger Goodell said Thursday, July 22, 2021, in a memo sent to clubs that was obtained by The Associated Press that the league doesn’t anticipate adding a 19th week to accommodate games that can’t be rescheduled within the 18-week regular season. (AP Photo/Jack Dempsey, File)

There is just over a week to go before the NFL season kicks off. Meanwhile, teams across the league are trimming down their rosters from 80 to 53 players to meet the NFL cut deadline on August 31 at 4 p.m. ET. Consequently, several former Gators received the unfortunate news this weekend.

Cam Newton’s tenure in New England comes to an end

The New England Patriots have released Cam Newton. He missed three days of practice last week because of what the team said was a "misunderstanding" related to Covid-19 protocols. https://t.co/LwHf9GVX49

One of the most interesting storylines so far has been the New England Patriots’ sudden release of quarterback Cam Newton. The news came as a shock to many as Newton had received a majority of first-team reps throughout the Summer. Furthermore, Newton started for the Patriots in all three of the club’s preseason contests.

Newton was away from the team for five days last week due to complications with COVID-19 protocol. And although head coach Bill Belichick is not known for making spontaneous decisions, he explained Newton’s vaccination status did not play into the decision.

But the league’s former MVP should be able find a role on another roster. Some suspect a likely landing spot to be the Washington Football Team and a reunion with head coach Ron Rivera. Others predict Newton landing with the Houston Texans if he is seeking a starter role this season.

Regardless, Newton appears to be maintaining an optimistic outlook following his release.

Yet another former Gator quarterback was released on Tuesday. The Carolina Panthers are waiving Will Grier after Grier lost the back-up battle to P.J. Walker.

The 2019 third-round draft pick struggled to see the field since his selection. During his time in Carolina, Grier appeared in two games and tossed for 228 yards with zero touchdowns.

Former Gators running back Jordan Scarlett was released Tuesday by the Miami Dolphins. The 2019 fifth-round selection came to Miami from the Carolina Panthers. While in Charlotte, he appeared in nine games as a rookie. Mostly contributing to special teams, he finished the 2019 season with nine rushing yards.

Control what you can I’m blessed #FinsUp

The Dolphins also waived former Florida Gators linebacker Kylan Johnson. On Saturday, the club placed Johnson on the reserve/COVID-19 list until he was medically cleared of not having the virus. However, the club announced cuts on Tuesday to meet the 53 man roster requirement.

Hope is still on the horizon after NFL cut deadline

As the NFL cut deadline is nine days before the season start, there is still hope for this group of former Gators. Keep an eye out for these names as they look to land jobs with other teams either on active roster or practice squad.

Tori Edwards is a fourth-year Telecommunications student specializing in News with an outside concentration in Sport Management. Tori works as an author and reporter for WRUF.com and is the voice of trendings on Monday afternoons on ESPN 98.1 FM - 850 AM WRUF. You can reach Tori at victoriaedwards@ufl.edu.
@ToriEdwardsNews
Previous NFLPA opens investigation on Jaguars Organization
Next Shorter, Henderson look for opportunities