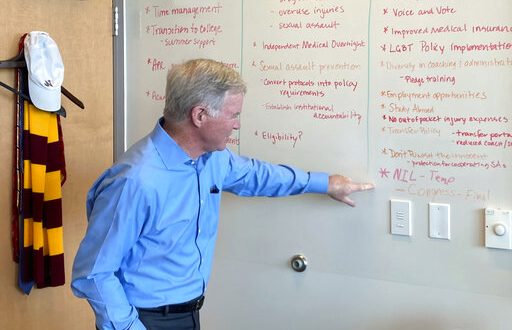 NCAA President Mark Emmert points to a dry erase board in office Wednesday, July 21, 2021, at NCAA headquarters in Indianapolis. Emmert is now the second-longest tenured leader in the long history of the NCAA. Over 11 years, he has guided the NCAA through a period of unprecedented change amid relentless criticism. (AP Photo/Ralph Russo)

The NCAA Board of Governors decided to hand over the power of determining transgender athlete eligibility within their transitioned-to gender. Effective immediately for winter championships, national sports’ governing bodies will serve as the de-facto mold for each sports’ transgender athlete policy. The policy replaces the NCAA’s 2010 ruling, which based eligibility on hormone levels for all sports.

The controversy has heated up amidst the success of transgender Penn swimmer Lia Thomas. Changes have been expected. They also go along with a recent International Olympic Committee decision.

Also as expected, people have strong opinions on both sides of the issue.

The new policy removes any NCAA rules from the equation. NGBs are the new masterminds and have all the power (assuming they have rules).

For example, volleyball will resort to USA Volleyball rules on testosterone levels and the like.  Football will not be as affected as other sports — though some women have played for NCAA football teams, like kicker Sarah Fuller. Women can already join a men’s football team, and are not widely considered to hold the advantage.

The policy’s principles align with November changes by the IOC, which gave eligibility ruling power to each sport’s international governing body, like FIFA for soccer.

“Approximately 80% of U.S. Olympians are either current or former college athletes,” said Emmert. “This policy alignment provides consistency and further strengthens the relationship between college sports and the U.S. Olympics.”

However, critics said the transition to the new policy will not be a smooth one– not all NGBs have rules for transgender athlete participation. In this case, though, the NCAA will move the federal governing bodies.

Others said the new policy is not so different from the old one and doesn’t resolve much.

Thomas began college swimming as a male. At Penn in 2019,  she began taking hormones to become a female. In line with the former NCAA policy, Thomas took testosterone suppression treatment for a year. She underwent hormone therapy for two years.

Now, she’s swimming as a female. She possesses the top NCAA female times in the 200-yard and 500-yard women’s freestyles.

Compared to her male times, Thomas’s times have slowed by 5 percent according to a December study. Yet, The Washington Post writes about this study, “the gap between elite male and female swimmers is 10 to 15 percent for shorter distance races and 7 to 10 percent for longer ones.”

Parents of some Penn swimmers penned a letter to NCAA officials declaring that her participation poses a “direct threat to female athletes in every sport.” Meanwhile, Penn Athletics said it will work with the NCAA and support Thomas in attempting to compete with the new rules with USA Swimming.

Thomas has been quite successful so far in NCAA women’s swimming. And if the rules allow it, most people would compete in the division they will win in, as with any sport that you can alter your competition based on weight.

Some people have expressed concerns about the rules regarding transgender athletes competing on the female side. They question if hormone therapy truly suppresses all advantages natural males have over natural females.

Simultaneously, males who transition to become females inarguably lose a good deal of their athletic advantages. They also already face transphobia outside of the athletic arena. Hence, proponents claim transphobia and politics motivate the restrictive rules.

Supporters of transgender women competing on the female side of NCAA sports argue all elite athletes are genetically gifted. Take a look at 6’8, 240-pounds fast-twitch Lebron James, and you will understand. Sports generally can’t escape biological advantages.

Further, transgender athletes are people, too. Being included on a sports team could make a big difference for an athlete who will likely face lots of discrimination in their life. Indeed, transgender people are 4 times more likely to experience victimization like battery and rape in their lifetimes. Not to mention the tragic suicide rate.

The acceptance of a transgender woman on a female sports team can validate her female identity.

Supporters of female transgender athletes competing as women say the basis of banning them from female teams is not fair competition, rather a way to exclude transgender people from public life. After all, bills like those in Texas exclude transgender females who never went through puberty as males, which would remove many advantages.

You know sports bans are not about "fair competition" when they ban transgender girls like Kai and Rebekkah from youth softball/soccer.

The bills ban them as well.

It's a smokescreen to remove trans people from public life. pic.twitter.com/uY9yuUUfLc

The transition process, though, may not be able to disregard the advantages of a larger frame size at birth; the average male is 5 1/2 inches taller than a female.

While she says she supports transgender people being their authentic selves, she believes a transgender athlete possesses too many advantages for a natural-born female to overcome, and they will be left behind at the podium.

“We need to protect our female athletes,” Jenner argued.

On the flip-side, critics of Jenner point out the hypocrisy in that she played in a women’s golf league after transitioning.

States like Florida and Texas have passed bills within the year to exclude transitioned females from female public high school sports teams.

Forming a level playing field while also including everyone who undergoes hormone therapy to live out their female identity is a complicated issue. For now, both sides search for happiness.