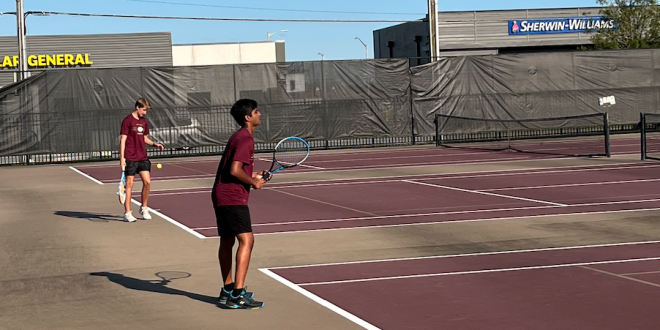 Oak Hall entered the court following a big win for the girls tennis team; they blew out Seven Rivers and walked away with a 7-0 victory. The boys team would keep the momentum going with a dominant evening of their own.

The Eagles started out their day with a doubles match. Oak Hall’s Andrew Powell and Grant Powell went up against Seven Rivers’ Mario Aguilera and Carmelo Cordero. The Powell brothers both had impressive days all around. They won their doubles match 4-1,4-0 and went on to each win their singles match 4-0,4-0. Grant credited the duo’s success to their level-headedness and style of play.

“[We were] really just focusing on our shots and playing smart,” Grant Powell said.

Andrew also noted how the pair started off hot and kept their momentum going throughout the day. This level of consistency carried over to the rest of the team as well.

“I’d say we were dominant from the start. We let one game go in the doubles match, but other than that, it was pretty steady… in both singles and doubles.”

After the Powells’ kicked things off, the rest of the Eagles put forth an incredible outing in their singles matches. From powerful serves to perfectly timed shots that caught their opponents off-guard, the Eagles controlled every facet of today’s meeting. It ended up being one of their finest outings this season, as they won all of their matches in both singles and doubles.

Sophomore Ayden Gallogly hits a hard serve that his opponent is unable to return in bounds. Gallogly won his singles match 4-1, 4-0. pic.twitter.com/tJGIwSVpOX

Rory Blynn sneaks in a nice shot during his 4-1, 4-1 victory in singles. pic.twitter.com/hOYwdT5jMi

A Break in the Action

The Eagles will get some time off before their next meet. They will return to the court on March 29, when they will host the Trinity Catholic Celtics.

Jack Meyer is a first-year student at the University of Florida. He is majoring in Journalism and specializing in Sports and Media.
@jackmeyerespn
Previous P.K. Yonge Secures a 3-0 Victory Against Chiefland
Next Santa Fe High Baseball Defeats Crystal River