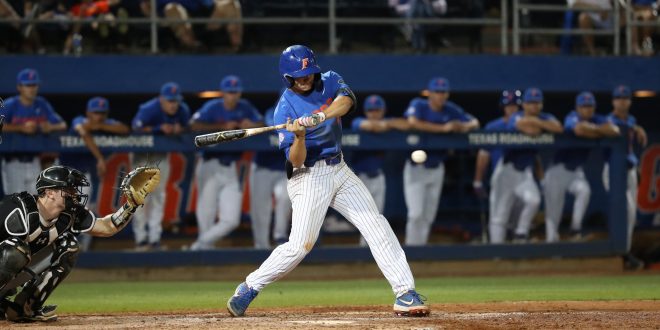 The Florida Gator (23-16, 6-11) baseball team was shut out by a score of 3-0 in game two of a three game home series by the Tennessee Volunteers (36-3, 16-1) on Saturday. With this loss, the Gators lose the overall series. The final game against Tennessee will be Sunday at 12 pm.

The Gators will need to start manufacturing some more wins as the season progresses, but head coach Kevin O’Sullivan knows that there is no need to dwell on the losses.

Gator Bats Quiet Against the Volunteers

Tennessee starting pitcher Blade Tidwell made it tough on the Gator batters in the first three innings on Saturday. The first nine batters of the game would not get on base by any means. Although, Wyatt Langford thought he had a single up the middle in the second inning, but a nice play from the Tennessee second baseman denied him.

Florida finally got on the board in the hit column in the fourth. After the first two batters got out in the inning, Sterlin Thompson and Wyatt Langford both singled to put runners on first and second. This brought BT Riopelle to the plate with a chance to grab the early lead for Florida, but he struck out looking to end the inning.

The Gators would get some base runners over the final five innings, but all reached base either by a walk or they were hit by a pitch. The only two hits in this game came in that fourth inning. As a whole, the Gators’ offense had two hits, two walks, two hit-by-pitches and eight strikeouts. Additionally, it got zero runs on the night against the Volunteers.

Gator coach Kevin O’Sullivan knows that they need to get their bats going, but did credit the Volunteer pitchers.

Brandon Sproat would start the game on the mound for Florida on Saturday and he pitched well.

The first four innings for Sproat were scoreless, although he did have to work himself out of some dangerous situations. In the second inning with one out, Sproat gave up a double and walk to back-to-back batters. He managed to get out of this inning with a double play. However, he did not keep it scoreless for much longer. In the fifth inning, Tennessee’s leadoff batter swung at the first pitch and launched it out of the park. This homer put Tennessee on the board first and up 1-0 over Florida.

While he only gave up one run in the fifth, Tennessee followed this inning with two more runs in the sixth. With one out and a runner on first base, Sproat would have another home run hit off him to extend Tennessee’s lead to 3-0. This would be Sproat’s last inning as lefty Philip Abner came in to relieve him in the top of the seventh. Abner got the first two outs in the seventh via the strikeout, but that would be it for him. Coach O’Sullivan called to the bullpen one more time in the inning to bring out righty Nick Ficarrotta. Ficarrotta would inherit two base runners upon entering the game, but forced a ground out to get out of the inning.

Ficarrotta ended the game for Florida. He went the final two innings and allowed no runs, including a three-strikeout eighth. Furthermore, he struck out four batters and only gave up one hit in his 2 1/3 innings.

Gator pitching in this game only gave up six hits but they it also walked five batters but overall the effort kept the Gators in the game.  The final game of the series will take place at noon on Sunday.

Even with a loss, coach O’Sullivan left with good thoughts about his bullpen.