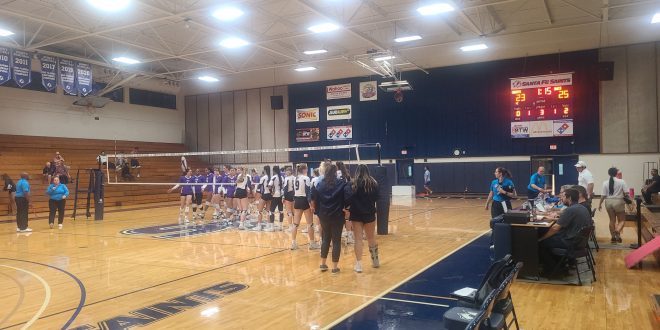 The Santa Fe Saints have been on the wrong side of the scoreboard for the last 5 games, and Thursday night was no different. The Saints suffered another 3-0 sweep, this time to number one Florida Southwestern, dropping them to 4-8 on the year. This loss continues a now six-game losing streak that leaves them looking to get out of a hole.

Set one kicked off a series of slow starts for the Saints, as they dropped the first set 25-16. High points for Florida Southwestern were undeniably their defense, which was impenetrable until the third set. The second set brought much of the same as Santa Fe was unable to find any groove on offense. Pair that up with a lackluster defensive performance, and that was a recipe for disaster. A quick timeout from Santa Fe, losing 11-5, was unable to energize the team as Florida Southwestern was able to take the second set easier than the first, winning 25-13. The third set saw a completely different team come out to play.

Finally starting out fast, the Saints jumped out to an early 11-6 lead after some great offense and sloppy play from Florida Southwestern. However, Florida Southwestern was able to get back on track, bringing the game back to even at 15-15. This set was special, as it contained not one, but two major lead changes that had fans on the edge of their seats. After giving up the lead and falling behind 20-17, it seemed like Sante Fe had let this set slip right out of their hands. Instead, they powered back, bringing the score to 24-23, their serve. Unfortunately, it ended on an anticlimactic note as the final serve from Keionna Mackey soared out of bounds, ending the set 25-23. This was a tough matchup for Santa Fe, and while they brought the energy in the end, Florida Southwestern proved to be the better team Thursday night.

Saturday, October 8th is the next game for Santa Fe, which has them on the road to play Polk State College. Sitting at 0-3 on the road this season, the Saints are ready for a rematch and, more importantly, a chance for a serious bounce-back. The last meeting between the two was a sweep in favor of Polk State: 25-16, 25-19 and 25-18. Polk State will come into this game with a 6-9 record overall and a 1-3 record at home.